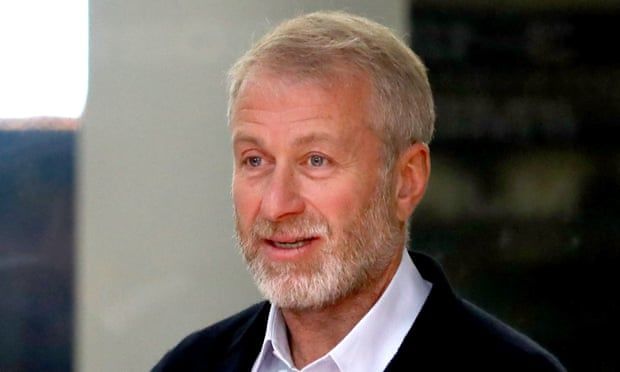 Chris Bryant says UK should seize Chelsea owner’s assets as he tells MPs allegations are from leaked 2019 Home Office document
The Chelsea owner, Roman Abramovich, was identified by the Home Office in 2019 as having links to the Russian state as well as to “corrupt activity and practices”, a Labour MP has told parliament, suggesting the UK should seize his assets and bar him from owning the football club.

Chris Bryant told MPs he was quoting from a Home Office document leaked to him, and asked why nothing more had been done about Abramovich’s UK assets given this official verdict.

Raising the issue of tier 1 visas, the sort held by Abramovich, which allow very rich people to invest in the UK, Bryant directly quoted a section of what he said was the Home Office document.

“I’ve got hold of a leaked document from 2019, from the Home Office, which says in relation to Mr Abramovich: ‘As part of HMG’s [Her Majesty’s government] Russia strategy aimed at targeting illicit finance and malign activity, Abramovich remains of interest to HMG due to his links to the Russian state and his public association with corrupt activity and practices,’” Bryant told the Commons.

He went on, still quoting the document: “‘An example of this is Abramovich admitting in court proceedings that he paid for political influence. Therefore HMG is focused on ensuring individuals linked to illicit finance and malign activity are unable to base themselves in the UK, and will use the relevant tools at its disposal, including immigration powers, to prevent this.’”

Bryant added: “That’s nearly three years ago. And yet remarkably little has been done. Surely Mr Abramovich should no longer be able to own a football club in this country? Surely we should be looking at seizing some of his assets, including his £150m home, and making sure that other people who have had tier 1 visas like this are not engaged in malign activity in the UK?”

Abramovich, who made his fortune acquiring newly privatised Russian oil assets following the end of the Soviet Union, bought Chelsea in 2003 and has put enormous sums into the club.

In 2018 he withdrew his application for a new UK investor visa, amid worsening links between the UK and Russia. Abramovich has an Israeli passport and has since travelled to the UK using that.

A week ago the government said it was ending the tier 1 visa system over concerns it allowed people to invest “dirty money” in the UK.

On Tuesday, speaking to the Commons as he announced a first wave of measures against Russia over its invasion of Ukraine, Boris Johnson said Abramovich was “already facing sanctions” because of links to the Russian state. However, Downing Street later said the prime minister had made an error, and formally corrected the record.

Abramovich has vehemently disputed reports suggesting his alleged closeness to Vladimir Putin and Russia or that he has done anything to merit sanctions being imposed against him.

Bryant cannot be sued for quoting the report and its claims about Abramovich, as statements in the Commons are protected by parliamentary privilege.