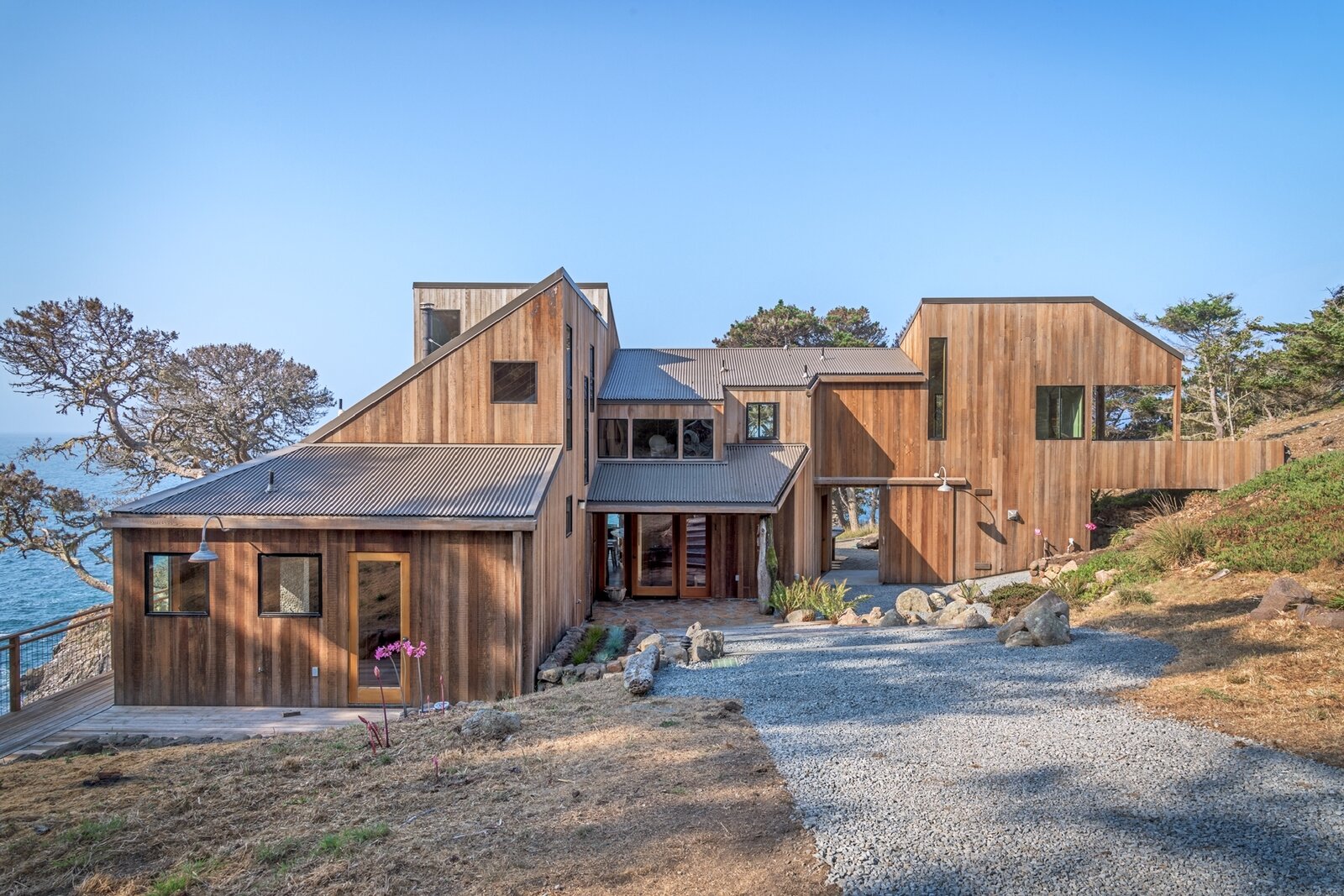 The home and studio of the legendary landscape architect features a glass solarium and outdoor amphitheater.

Arguably the most acclaimed landscape architect of the 20th century, the late Lawrence Halprin created the Franklin Delano Roosevelt Memorial in Washington, D.C. and the Keller Fountain Park in Portland, Oregon, which was called "possibly the most important urban space since the Renaissance" by New York Times critic Ada Louise Huxtable.

Halprin’s most famous and resonant design, however, may be the master plan for Sea Ranch, a residential community along the California coast about 100 miles north of San Francisco. In the ’60s, drawing from his early years spent on an Israeli kibbutz, he imagined an idyllic development for people to "inhabit this land and protect the awesome character without softening or altering it." Admirers of Sea Ranch will be interested to hear that Halprin’s own residence has been listed by his estate for $8,000,000. 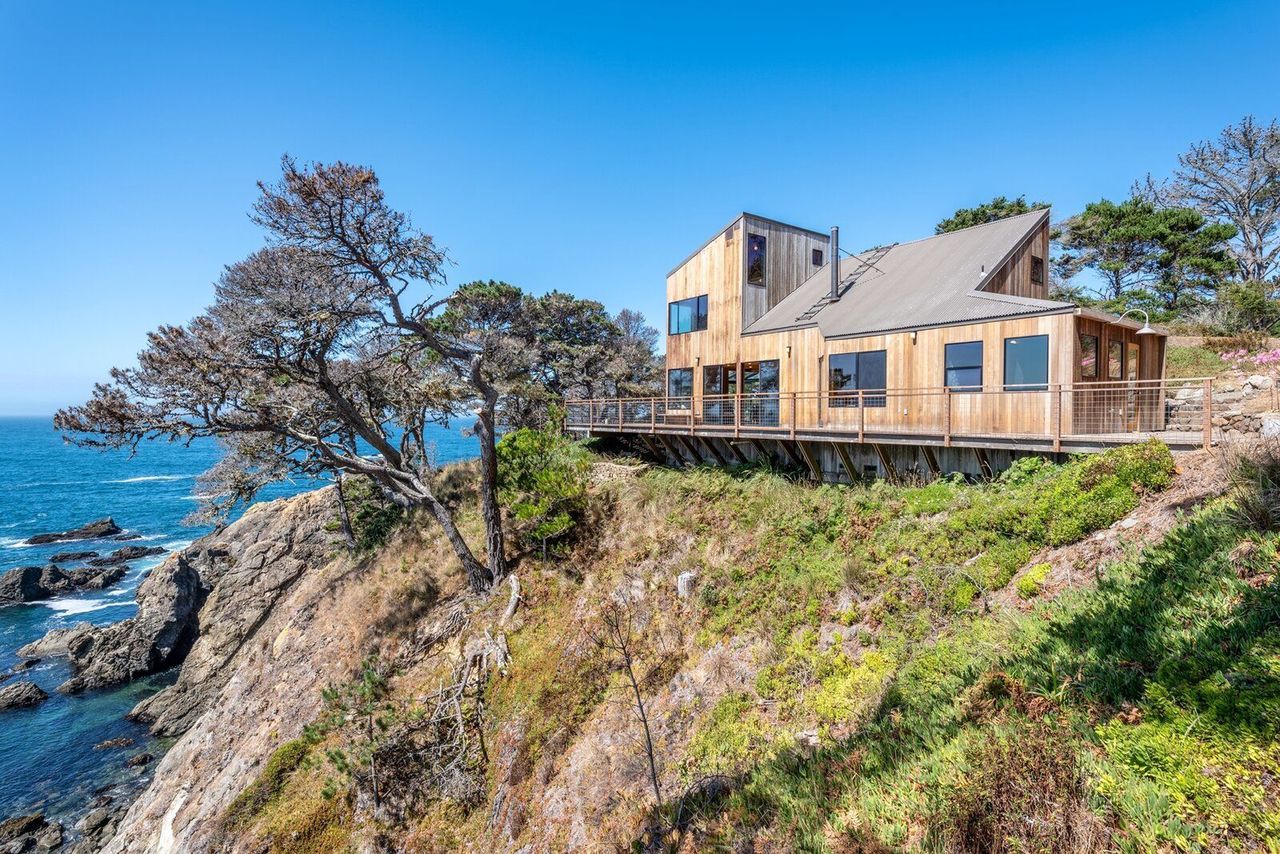 Unlike any other at Sea Ranch, the Halprin residence is built along the cliffside for spectacular views. 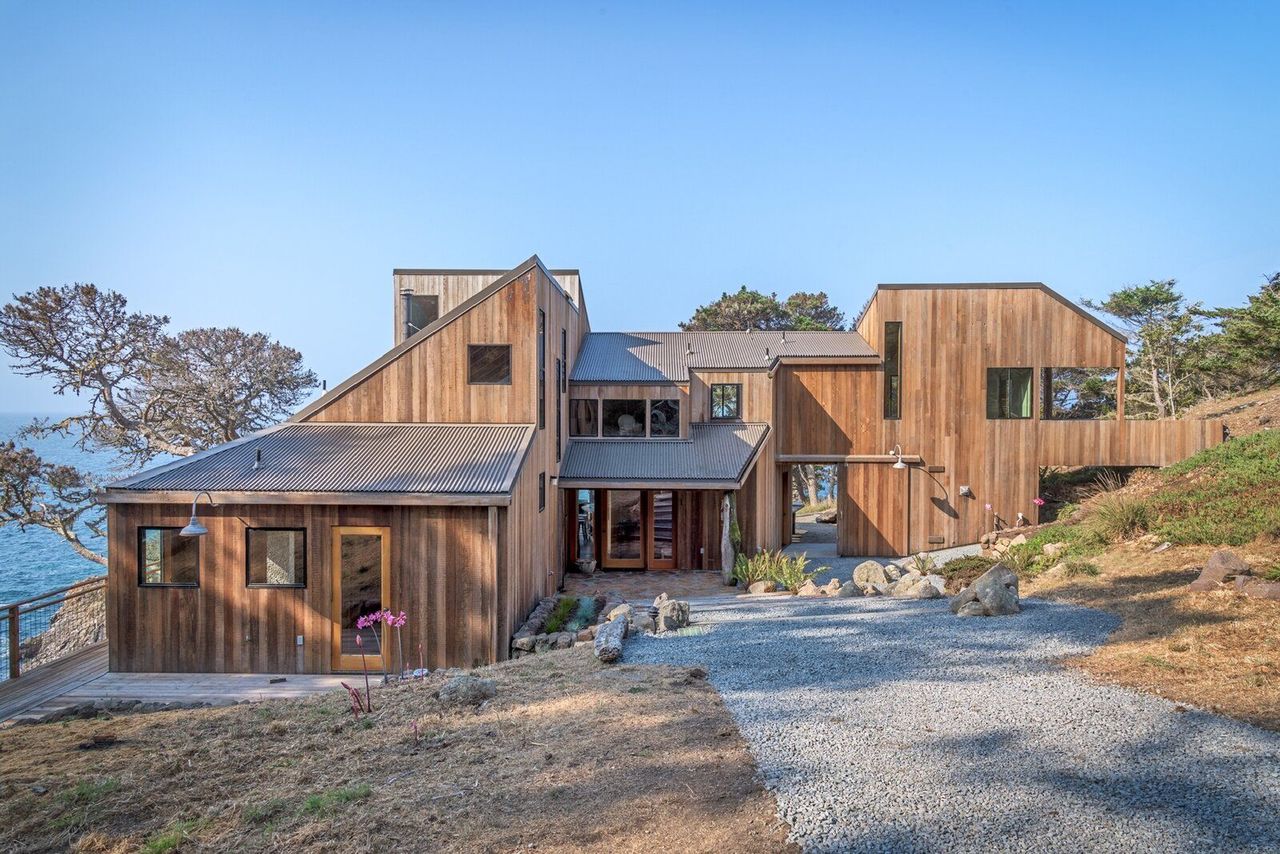 The L-shaped home sits on 5.1 acres. In his master plan for Sea Ranch, Halprin designated that more than half the property be common land, preserving vast meadows as outdoor rooms instead of relying on lawns. He also established guidelines for using natural materials that deferred to the surrounding landscape.

The Halprin residence sits on 5.1 oceanfront acres. Originally built in 1966, the family home was a modest cabin designed by Charles Moore, and in 1979 there came along a detached studio-but in 2001, the house burned down. It was replaced two years later by the current building designed by Buzz Yudell, a longtime colleague of Moore’s. Nearly identical to the first home, the two-bed, two-bath, 2,123-square-foot residence makes use of even higher-quality materials. 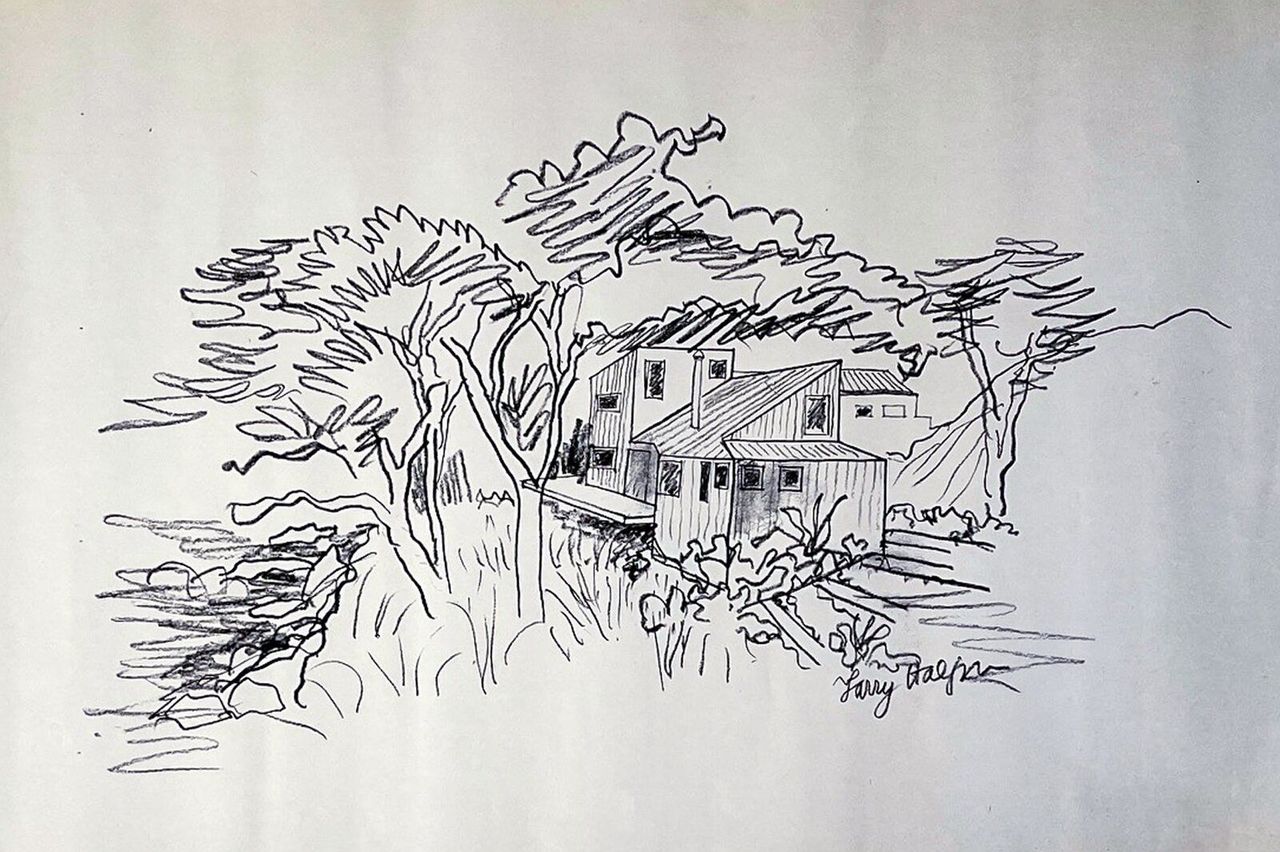 A sketch of the home by Lawrence Halprin.

Though Halprin’s own guidelines discourage houses from being built directly on the cliffs, his home cantilevers over the rugged slope. "Walking on the narrow oceanside balcony," writes Kenneth Helphand in his 2017 book Lawrence Halprin, "feels like being on the deck of a ship at sea…From his Sea Ranch cabin, Halprin could experience nature’s forces at their most powerful and primordial." 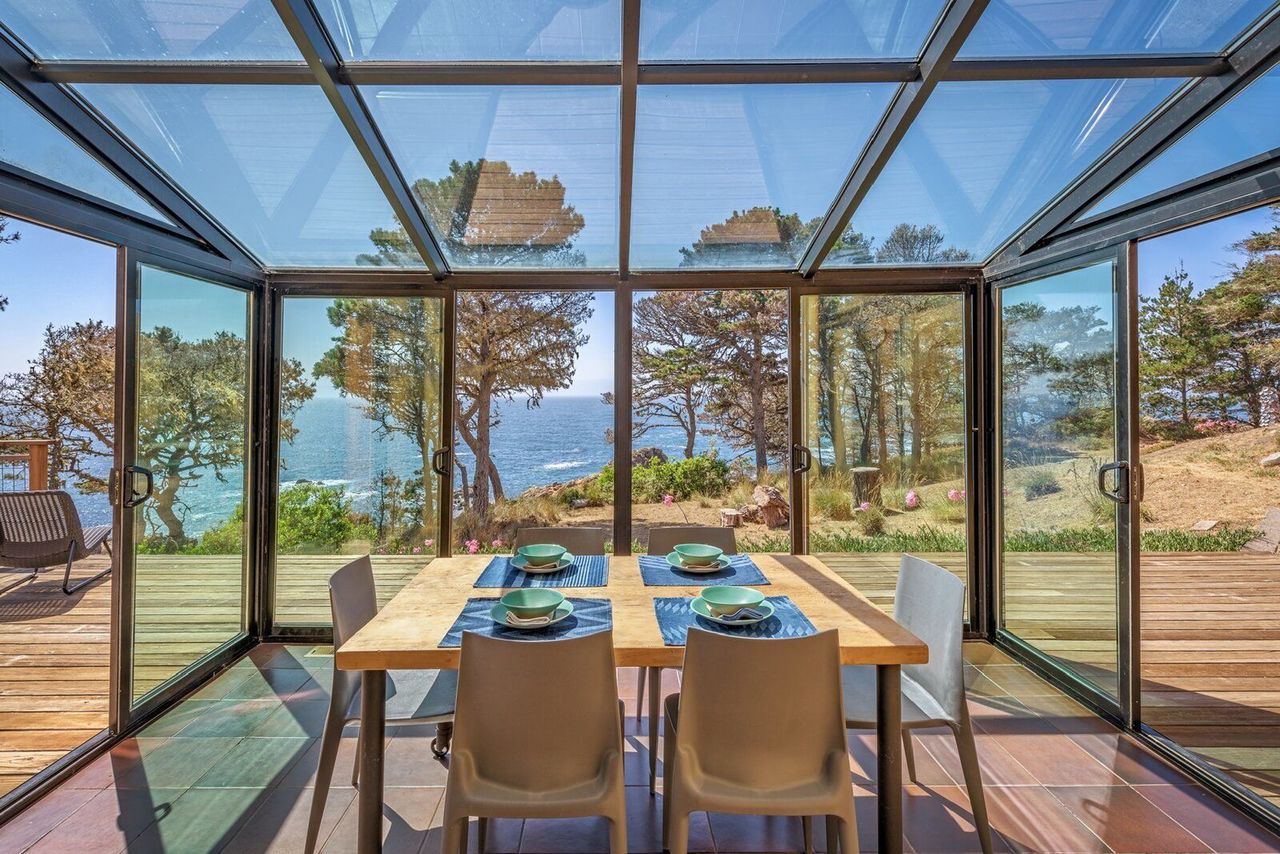 The solarium protrudes onto the home’s back deck, bringing light deep into the interior.

Broker and realtor Hanne Liisberg, who herself lives in the community, calls the Halprin residence "the most amazing five-acre oceanfront parcel I’ve seen at Sea Ranch or on the coast. Halprin had the opportunity to hike the entire length of what became Sea Ranch. He clearly picked the best." 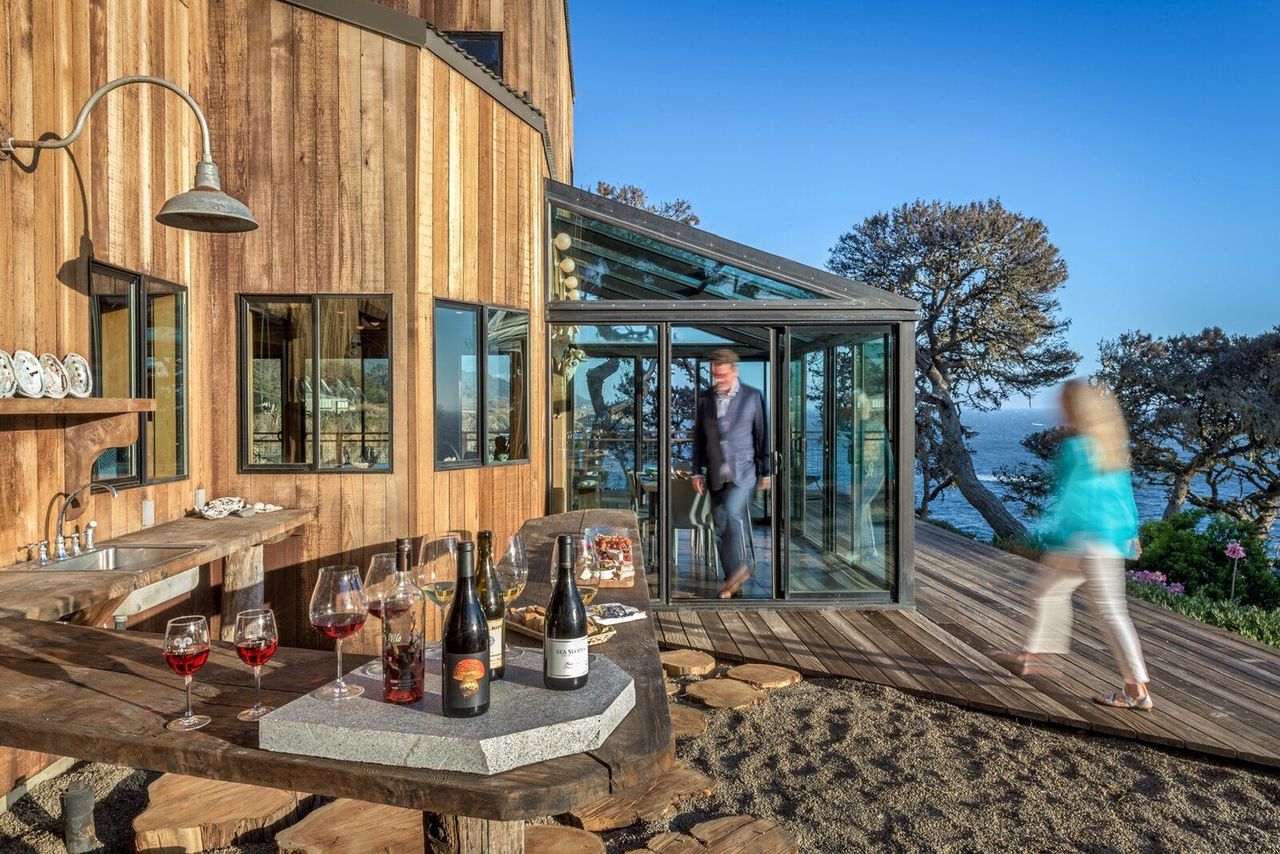 At the rear of the house, beside the deck and amphitheater, there’s a modest wet bar for outdoor entertaining.

With cedar siding and Douglas fir trim, the house is what Liisberg calls "Sea Ranch classic." Its rising and falling roof planes impart a sense of kinetics, and windows frame views from every room. 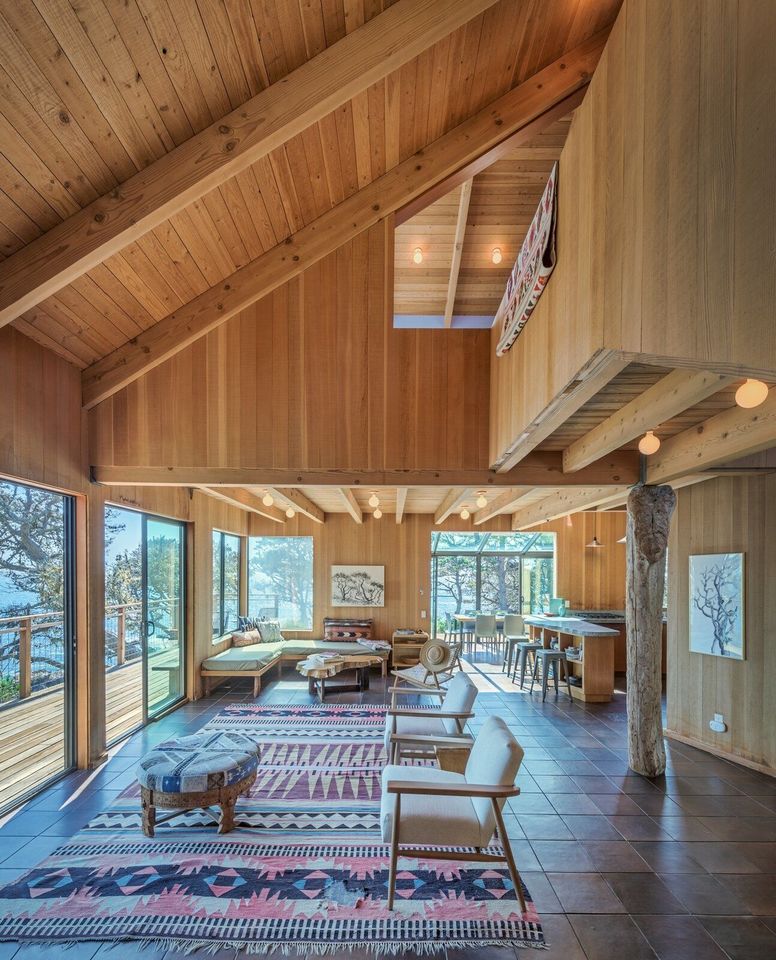 While the views are certainly impactful, says Liisberg, "it’s not one of these large, pretentious houses. The views are framed in various directions, and I think that creates the experiences as you walk through." 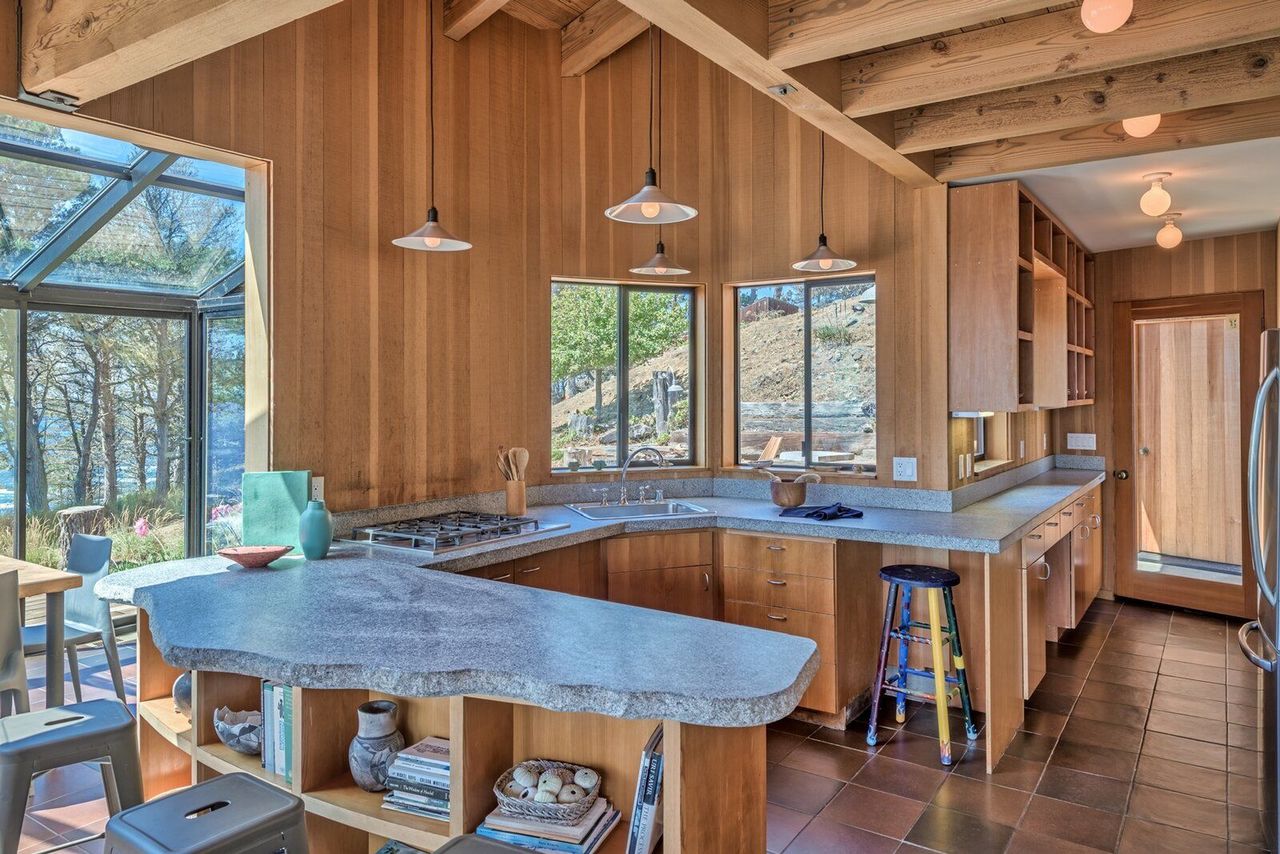 The kitchen features built-in open shelving and a breakfast bar with a raw-edge countertop. 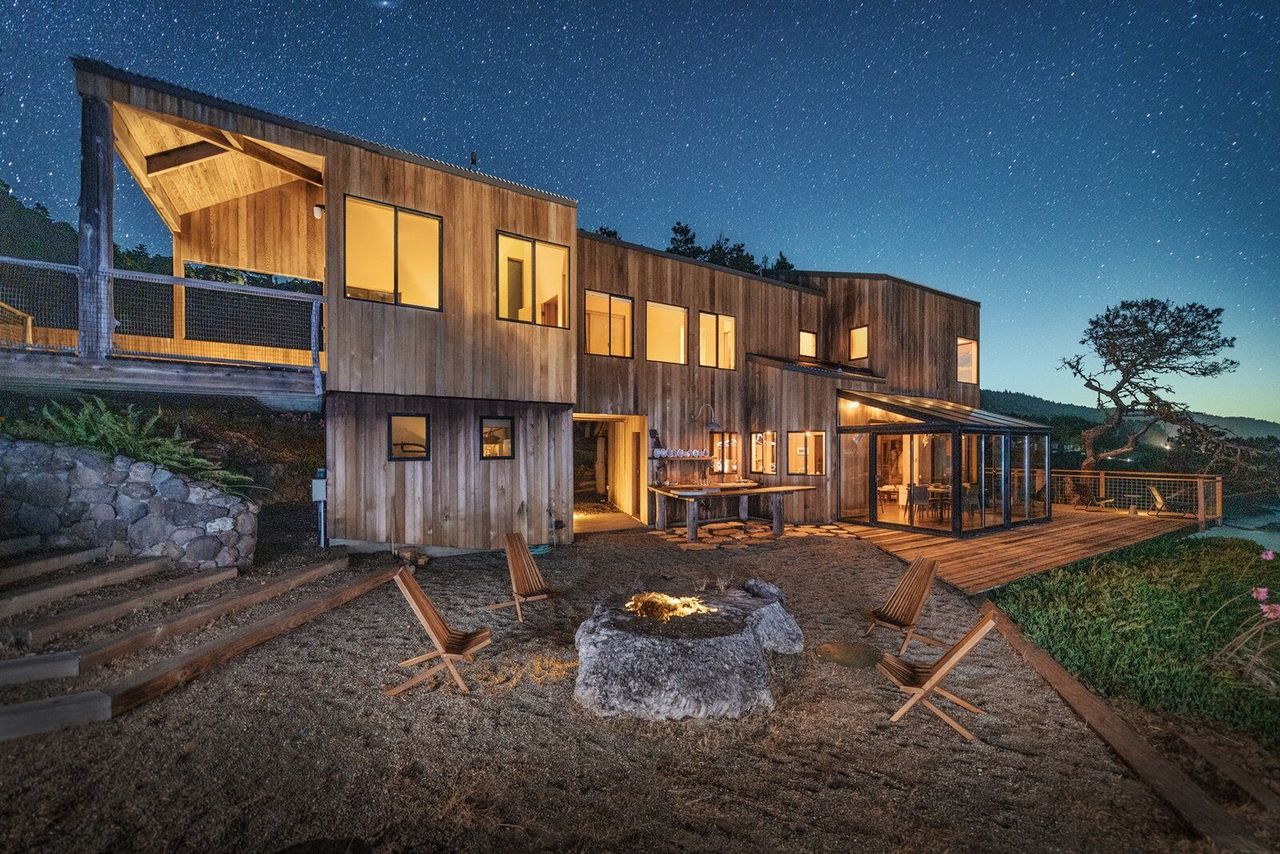 There’s an adjacent amphitheater where Halprin’s wife, Anna, a professional dancer, led workshops. "Being there, flowing from the inside to the outside through the glass solarium, is a magical transition," says Liisberg. 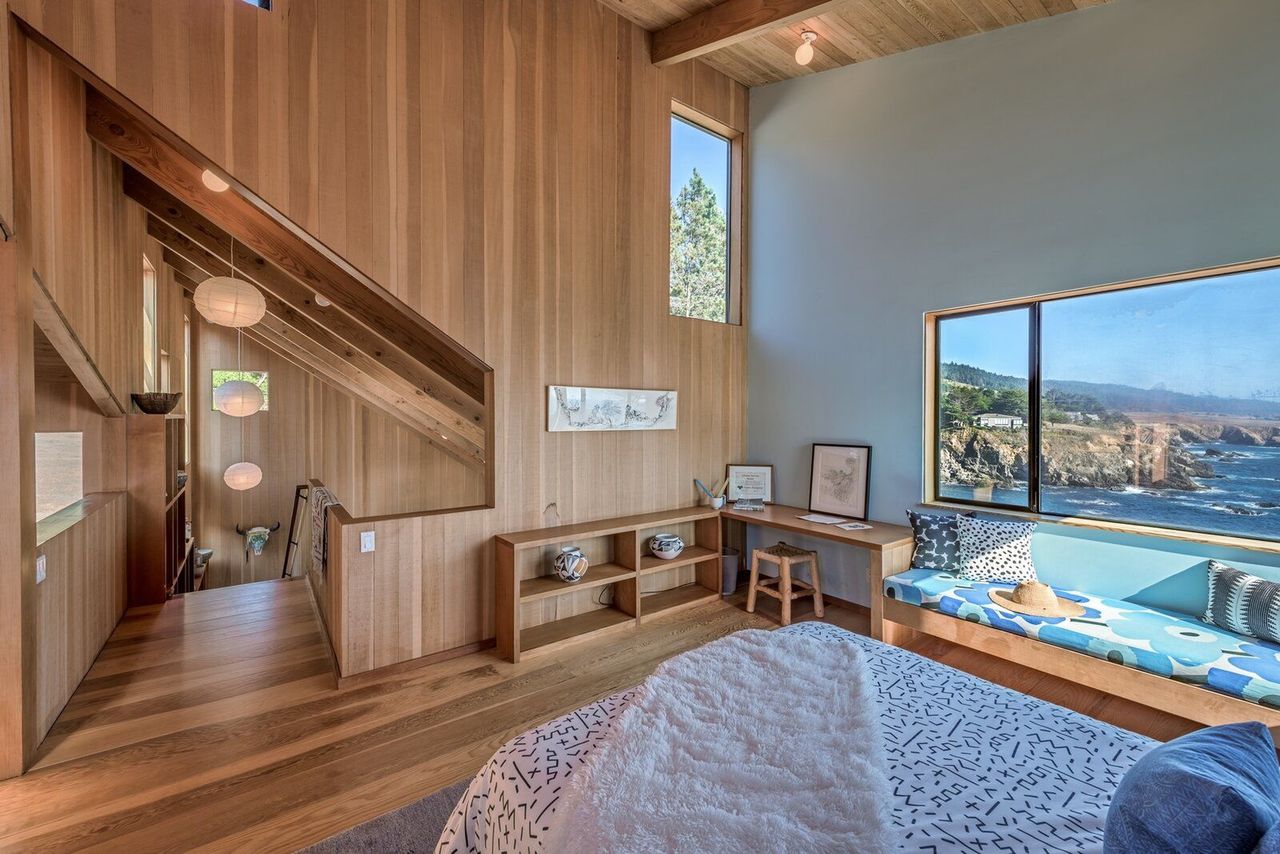 The loft-style main bedroom captures views of both the coast and surrounding treetops. Since the beginning of the pandemic, Liisberg has seen more young families with children moving to Sea Ranch. "I think the pandemic made everybody think about what’s important to us-especially nature," she says. "At Sea Ranch, you can go from the redwood forest to the beach in an hour’s hike." 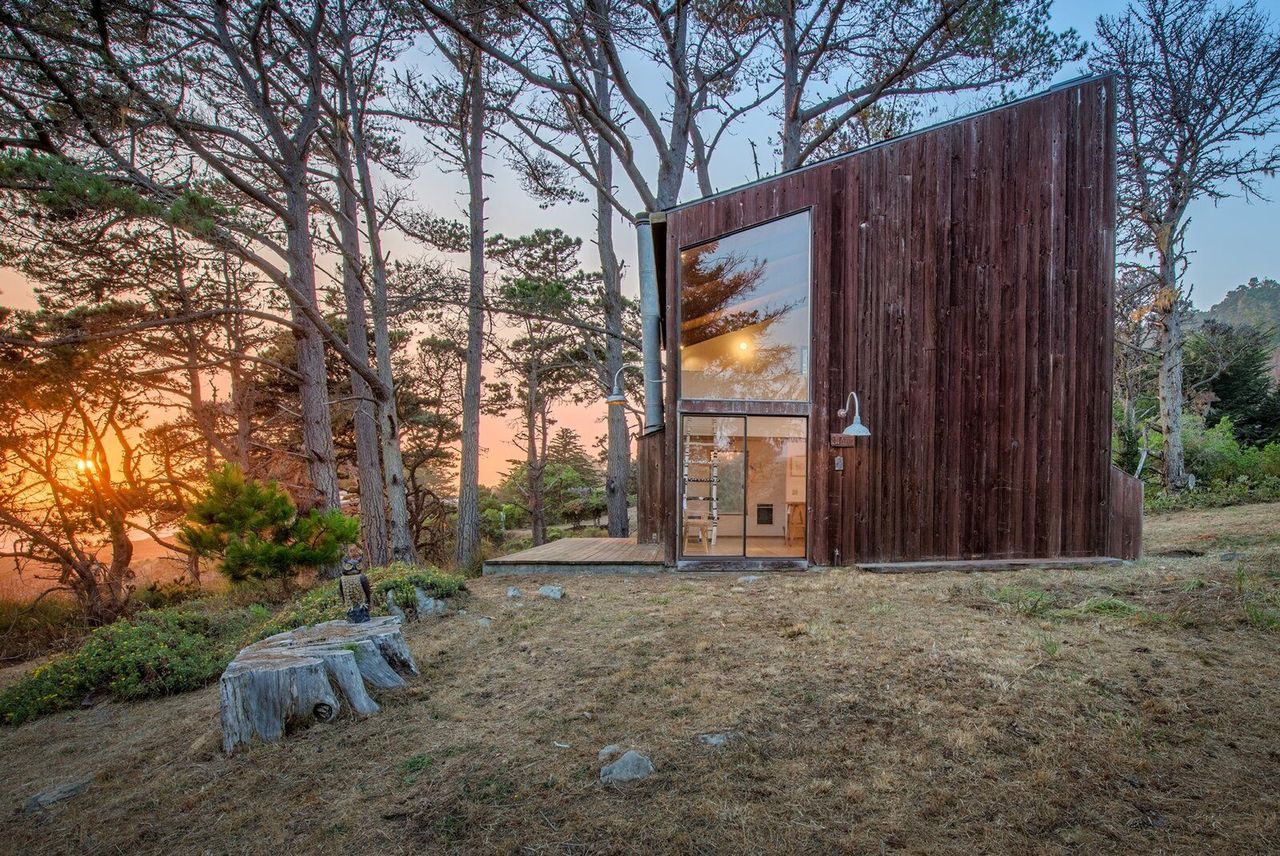 The separate studio building was added in 1979, and still has Halprin’s drawings pinned to the walls.