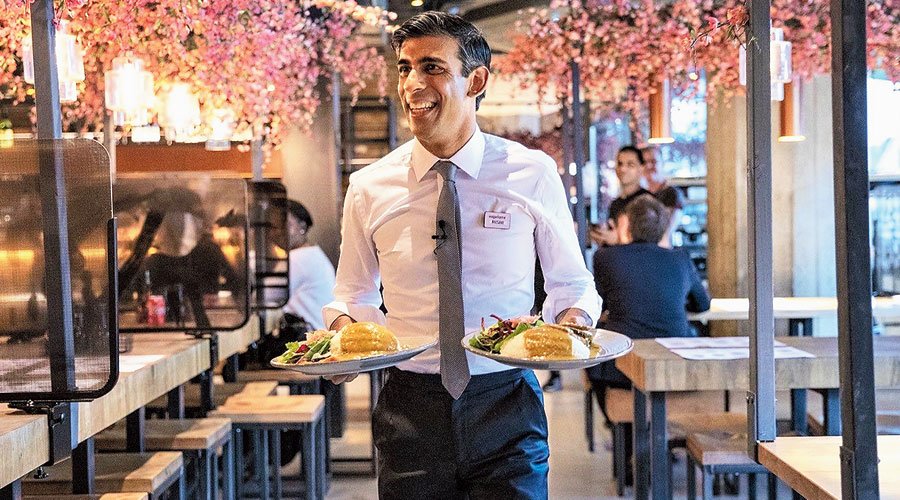 Restaurants and pubs enjoyed a much-needed uplift in visitors this week as the prospect of a half price meal encouraged people out of their homes.

More than 73,000 restaurants have signed up to the ‘eat out to help out’ scheme which launched this week and gives customers a 50pc discount on their food bill when they dine in from Monday to Wednesday throughout August.

The Government funded initiative, which is capped at £10 per head, has already made a significant difference to booking levels at many restaurants.

“Demand has been incredible, we could probably have sold the table three times over,” Will Beckett, co-founder of steak chain Hawksmoor, says. “We’ve got around 15,500 bookings for the 13 days across August [when the scheme is running], so we’re really pleased with it.”

The boss of one major pub chain says he expects to see a double digit increase in bookings as a result of the scheme.

Mark Selby, co-founder of Wahaca, says restaurant covers during Monday to Wednesday, typically quiet days for the sector, are now 50 to 100pc higher than usual.

“I wasn't sure how many people were going to take it up and so far there's been a really positive pick up,” he says.

“For a lot of people, who haven’t eaten out since lockdown restrictions were eased, this has given them a reason to go out and given them some confidence.”

Such is the success of the scheme that some operators have chosen to foot at least some of the bill themselves. Supermarket Morrisons is extending the initiative at its cafes throughout the entire week and will subsidise the discount from Thursday to Sunday, while Whitbread has removed the £10 cap from its restaurants so diners will get a full 50pc discount, regardless of how much they spend.

Even higher end restaurants have stepped in with their own improvements. At Hawksmoor, where most bills generally exceed £50 per head, diners can now get a steak, chips and sauce of their choice for £10 from Monday to Wednesday throughout August. Beckett says by passing on the VAT reduction and an additional discount, a meal which would normally cost around £30 will now be a third of the price.

Sceptics say that the rush to take advantage of the discount at the beginning of the week could lead to even more subdued sales at the weekend.

Restaurants generally need to operate at around 80pc capacity just to break even, but social distancing requirements and weak consumer confidence mean outlets are currently running at anywhere between 20 and 80pc.

Andrei Lussmann, founder and director of Lussmanns, a group of fish restaurants backed by investor Luke Johnson, says that while the scheme might mean weaker demand at weekends, its biggest impact will be to drive consumer confidence.

“Thursdays have definitely taken a hit, so it might well be that you have a really bad day on Thursday and then weekends are not quite as busy as they have been,” Lussman says.

“That's not to say that it's not a good scheme. Anything that engages and ignites some interest and motivates people to come out and eat has got to be a good thing.”

The real impact of the initiative is yet to be felt, but some operators are worried about what bookings will look like from September once the scheme ends and the temperature starts to cool, making outdoor seating a less attractive option.

“I am worried, don't get me wrong,” Wahaca’s Selby admits. “Before this, sales weren't in the best of places.”

Figures from data experts Springboard show that visitors to UK retail destinations rose by 7.8pc between Monday and Wednesday lunchtime compared with a week earlier. However, the increase is skewed by a weak comparison, Springboard said, with heavy rain on Monday last week meaning more people stayed at home.

Meanwhile, footfall remains significantly lower than pre-Covid levels, with visitors down by almost a third compared with the same period a year earlier.

Restaurateurs admit that while the Chancellor’s discount scheme is unlikely to translate to an increase in profits in most cases, the bigger achievement is to make people comfortable about visiting restaurants again and prove they are safe and clean places to go.

“The best we can hope for is that this scheme gives people the confidence to come out and feel safe in a restaurant while having a great experience,” Selby adds.

“If that can be the legacy of this, then it's been a great success."
Add Comment