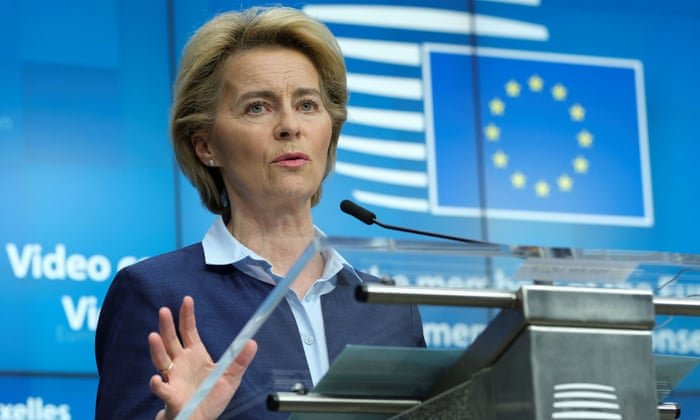 The EU and Covid-19: better late than never

Europe is in the pandemic frontline but unity among the nations has been rare. That may be changing – not before time
Almost seven weeks after the World Health Organization confirmed the pandemic, Europe remains in the frontline of the battle to contain the Covid-19 virus. Five of the six countries reporting most cases are in Europe. Seven of the 10 countries reporting most deaths are in our continent too. Yet Europe has struggled to make common cause against the virus. In particular, it has bickered over how to support the most affected European economies against the consequences of the lockdown. In spite of innumerable acts of cross-border solidarity on the medical front, the rich nations of Europe have proved reluctant backers of the continent’s embattled poorer economies.

The good news, relatively speaking, is that this divide has not got worse and may, just possibly, have eased a little. This week, leaders of the 27 EU nations finally signed off on a €540bn rescue package. This gives countries such as Italy and Spain, which stand second and third to the United States in Covid-19 cases and deaths, the right to borrow from the eurozone’s bailout mechanism. The problem is that the EU’s southern member states are reluctant to borrow their way out of the problem, in part because they fear that to take on more debt would deepen the inequality between the EU’s south and north.

Instead, France and the southern member states want the EU to make financial transfers to its worst-affected members. Some rich states, notably Germany, balk at this. All of them, though, want to avoid a prolongation of the EU’s damaging divisions of March and early April. As a result, the EU27 decided on Thursday that they would pass the parcel to Ursula von der Leyen and the European commission, who have been tasked with creating a recovery fund alongside the EU’s next seven-year budget, which is required by the start of 2021.

No figures have yet been agreed, but the recovery fund device could prove a smart way of allowing the EU and its richer member states to stand by the poorer ones. In Thursday’s virtual summit, Angela Merkel said that Germany, already the EU budget’s largest net contributor, would make a significantly higher contribution “in the spirit of solidarity”. Ms von der Leyen said afterwards that the EU would be trying to create a funding mechanism that allowed for a balance of grants and loans.

This will be anything but easy. Familiar disputes about the size of the EU budget have not disappeared. Indeed, the UK’s departure had made them trickier. Now, in time-honoured fashion, the EU has also kicked the can down the road over the recovery fund. But it cannot do that for long. Ms von der Leyen has only weeks to come up with a package. The package is likely to be enormous. But the economic damage caused by the pandemic means this issue is urgent and could still pose existential questions, as Emmanuel Macron said this week, for the EU itself.

This is a huge moment for the EU. But it has direct implications for Britain too. If the Brexit transition was to be extended into 2021, the UK would have to extend its budget contribution too. It is hard to see the current British government contributing to the EU recovery fund as well. Yet there are no easy choices for any government in the wake of the pandemic shutdown. The EU may be divided over the economic response. But if the choice for Britain lies between cooperation with a divided EU and cooperation with a United States led by a delinquent president who advocates ingesting disinfectant, it would be a no-brainer.
#COVID-19  #Covid  #Angela Merkel
Add Comment