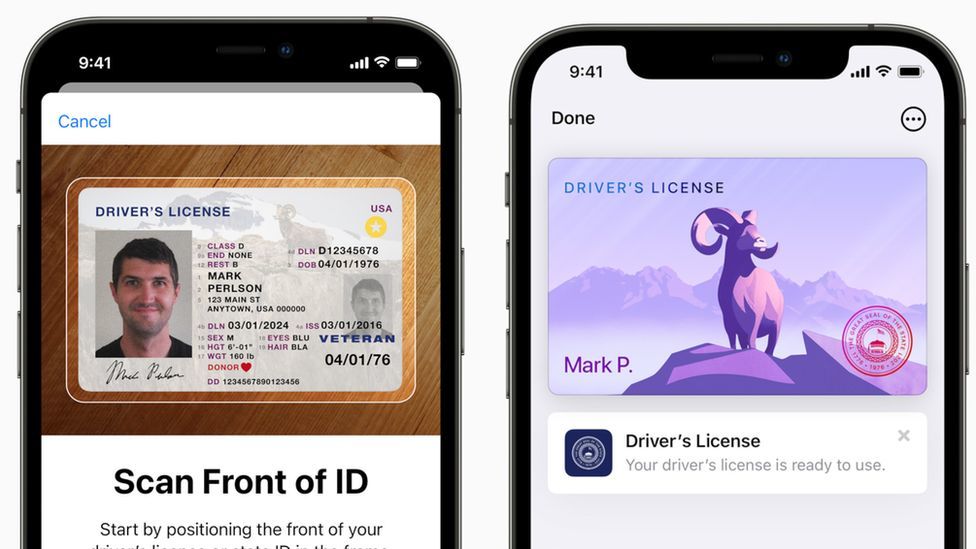 US states to accept driver's licence on iPhones

Eight US states will accept driver's licences and other state IDs stored on an iPhone, Apple has announced.

The feature, first announced at a presentation in June, lets iPhone users store IDs in the Wallet app.

Some had expressed privacy concerns about handing over smartphones to police or security officials.

Apple now says users do not need to unlock or hand over their phones for the system to work for airport security.

But it remains unclear if or how it might eventually work for other uses of ID, such as drivers stopped by police.

Arizona, and Georgia will introduce the system first, with Connecticut, Iowa, Kentucky, Maryland, Oklahoma, and Utah also signed up.

The "first locations" to use the system will be airport security checkpoints run by the Transportation Security Administration (TSA), Apple says.

Americans usually need some form of state ID only to travel by air domestically, unlike other countries, in which a passport is widely used.

Tapping a phone at an identity reader at supported airports will prompt passengers to use their Face ID or fingerprint to authorise sending information to the machine.

"Users do not need to unlock, show, or hand over their device to present their ID," Apple said.

Apple's announcement also stressed other security features of its new app, "offering superior security and privacy over a physical wallet".

Neither Apple nor state authorities would know when or where ID was presented, it said, and all personal information was encrypted.

But the concept of digital IDs remains controversial.

Covid passports, which emerged over the past year, were initially met with some resistance by privacy campaigners.

And digital rights group the Electronic Frontier Foundation has said digital IDs "might be a big step towards national identification, in which every time we walk through a door or buy coffee, a record of the event is collected and aggregated".

It was "troubled" by the mobile-driver-licence technology, which could "make demands for ID more frequent in American life", the group said.

"They may also lead to the routine use of automated or 'robot' ID checks carried out not by humans but by machines, causing such demands to proliferate even more," the group added.