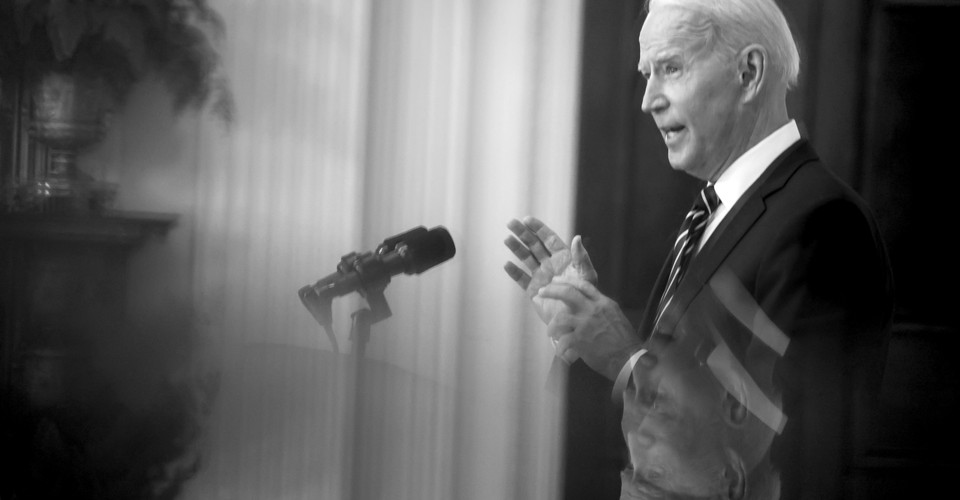 The president invoked an unexpected source of inspiration.
Joe Biden has a reputation as a softie—grandfatherly if you’re inclined toward him, somewhat windy and elderly if you aren’t. But when he reached for a phrase to define his approach to office during his first press conference, held today, he didn’t pick an Irish poet or an American statesman. Instead, he quoted the hardheaded Teutonic conservative known as the “Iron Chancellor”: “Politics is the art of the possible,” Biden said.

The president invoked Otto von Bismarck in response to a question on filibuster reform. Biden went further than he has in the past, coming close to an out-and-out condemnation of the 60-vote requirement, even as he said he’d be open to tweaks such as a “talking filibuster” or a civil-rights exemption, rather than an outright abolition of the process. Bismarck’s axiom is a cliché, and it might have gone unnoticed in another context. But the pursuit of the possible, in particular with regard to the filibuster, is a useful frame for thinking about how Biden’s presidency has thus far confounded two leading concerns about him.

On the left, critics worried that Biden was a bipartisanship fetishist, more interested in paying homage to the old ways of doing things (or not doing them, as the case might be) than actually achieving progressive goals. On the right, critics painted him as a puppet of the “woke” wing of the Democratic Party, putting a friendly face on a radical agenda. Obviously, both of these views couldn’t be right. But so far, neither one has proved correct.

As I wrote earlier this week, Biden has been more comfortable forging ahead with only Democratic votes than he usually suggested he would be during the presidential campaign. The White House muscled through the $1.9 trillion COVID-relief package with just Democratic support, though doing so required relying on a procedural maneuver called reconciliation, which allows the Senate to pass budget-related bills with a bare majority. Many of his remaining goals can’t pass that way, though.

On the one hand, the president said, “Our preoccupation with the filibuster is totally legitimate, but in the meantime, we’ve got a lot we can get done while we are talking about what we’re going to do about the filibuster.” On the other, he allowed, “If there’s complete lockdown and chaos as a result of the filibuster,” drastic reforms might be necessary.

Biden continues to say that he hopes for Republican votes. He brushed off Senate Minority Leader Mitch McConnell’s complaints that Biden has gone hard left, arguing that that’s exactly what McConnell has to say but also noting that approval of the relief package among ordinary Republicans is strong. “I would like elected-Republican votes, but what I know I have now is electoral support from Republican voters,” Biden said.

Still, he also said that he wants to see reforms to the filibuster. First, he endorsed the “talking filibuster,” in which a minority has to actually hold the floor for hours to block legislation. (He joked that it was the practice when he got to the U.S. Senate “120 years ago.” Much of the coverage ahead of the press conference had focused on whether he’d appear doddering, and this quip seemed like a wry way of mocking that; he also repeatedly emphasized the length of the press conference, as if to underscore his stamina.)

Biden also indicated that he was willing to go further. “I’m a fairly practical guy,” he said. “I want to get things done. I want to get them done consistent with what we promised the American people. And in order to do that, in a 50–50 Senate, we’ve got to get to the place where I get 50 votes.”

But Biden’s slow turn against the filibuster is about results, not signaling. When CNN’s Kaitlan Collins asked Biden whether he agreed with Barack Obama that the filibuster is “a Jim Crow relic,” the president didn’t hesitate to say yes. Why, then, she asked, wouldn’t he want to get rid of it altogether?

Biden paused for a long moment. That’s when he quoted Bismarck, the great exponent of realpolitik. Offered a chance to take a stand that was both morally pure and politically futile (he doesn’t have sufficient Democratic support to eliminate the filibuster entirely), Biden turned it down.

The president’s movement on the filibuster was the biggest news from the press conference, and also the topic on which he was most straightforward. Biden announced a new goal to distribute 200 million COVID-19 vaccines in his first 100 days in office, but no reporters asked him about the pandemic. He hemmed and hawed about the surge of migrants at the Mexican border, alternately blaming the Trump administration for causing problems and insisting that the status quo is long-standing. He also offered a vague pledge of press access to detention centers, but wouldn’t say when or how it would be implemented. Biden declined to give a definitive answer on whether he’d meet a May 1 deadline for withdrawing troops from Afghanistan, while strongly suggesting that he wouldn’t; he did, however, say he doubted U.S. troops would be there next year.

These also happen to be issues on which Biden has little stake in laying down markers. The border has been a mess for decades, and the White House can only hope to mitigate it right now; Afghanistan is an unwinnable and forgotten war, where the American goal is a low-key exit. Instead of focusing on these topics, he’s trying to emphasize issues where he can actually make progress.