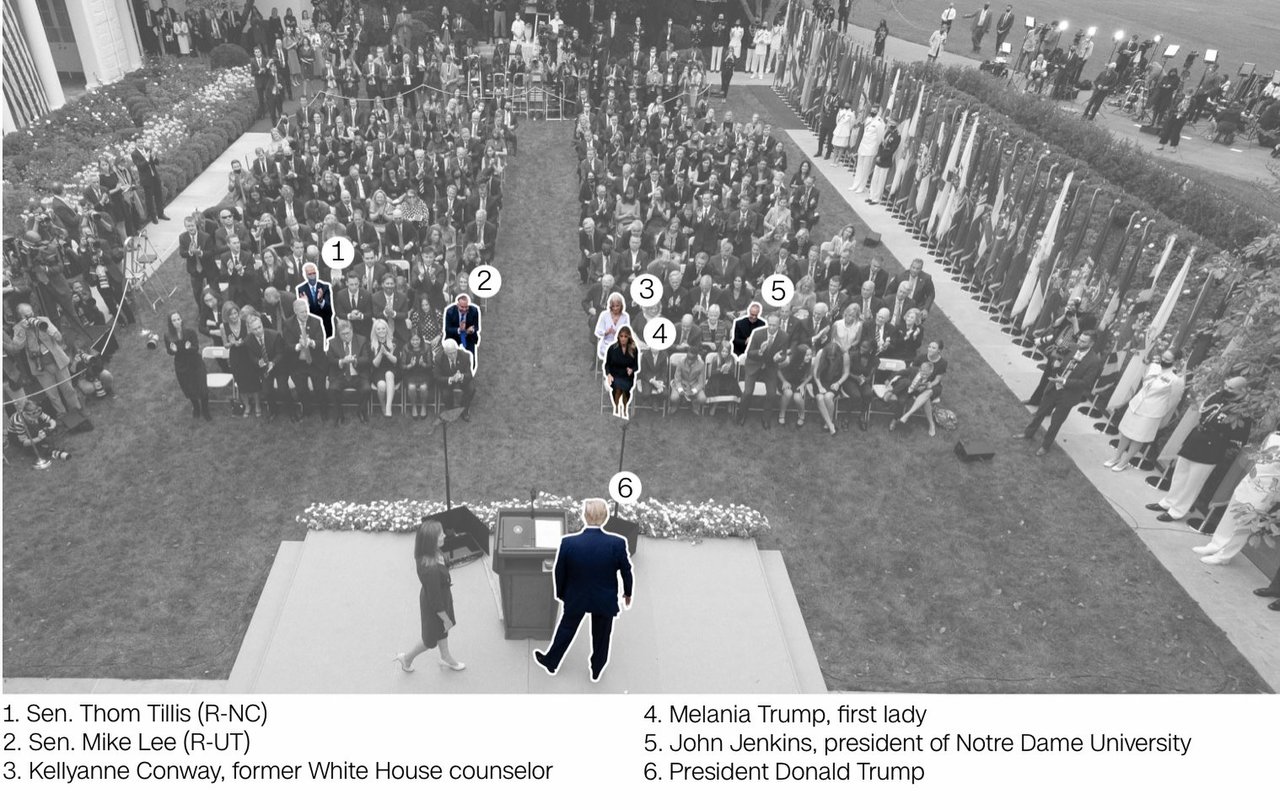 White House guests who have tested positive for Covid-19

President Trump, several top White House aides and Republican lawmakers have tested positive for the coronavirus, -- likely restructuring the final weeks of the presidential campaign, the race to confirm Trump's Supreme Court pick and even the day-to-day workings of the federal government.

In the days before he tested positive for the virus, President Trump kept a busy schedule that included campaign stops, fundraisers, White House events and the first presidential debate against Democratic nominee Joe Biden.

Then early Friday came news that Trump and first lady Melania Trump had tested positive for the virus that has killed more than 208,000 Americans. Before the day was over, Trump was flying to Walter Reed Medical Center in Maryland to be treated for mild symptoms of the virus.

"Going well, I think!" the president tweeted from the hospital late Friday, exhibiting his trademark sense of humor. "Thank you to all. LOVE!!!"

But the president was expected to be off the campaign trail until he recovers, leaving the stumping to Vice President Mike Pence and other surrogates.

Biden was also thrown by the president’s diagnosis, pulling attack ads against Trump and striking a more unifying tone after testing negative for the virus.

Trump plans to continue his day-to-day duties from the presidential suite at Walter Reed while he convalesces for the next few days, White House press secretary Kayleigh McEnany said.

After Trump entered the hospital, news of more positive diagnoses of people close to the president emerged. Those facing troubling news included Kellyanne Conway, until recently the president's White House counselor, and Bill Stepien, manager of the Trump 2020 Campaign.

Trump’s diagnosis also called into question the remaining two presidential debates, set for Oct. 15 in Miami and Oct. 22 in Nashville, Tenn. Whether Trump will still be in quarantine on those dates is uncertain.

Politicians and pundits have floated whether the debates may be canceled or possibly done virtually. Fox News’ Brett Baier said it’s even possible the president could be well enough to travel in-person to the Miami debate if he recovers by then.

As of Friday, the vice presidential debate was scheduled to go forward as planned next Wednesday with Pence and vice-presidential nominee Sen. Kamala Harris, who have both tested negative.

Senate Minority Leader Chuck Schumer, D-N.Y., said Friday evening it would be “irresponsible and dangerous” to move forward with a Senate Judiciary Committee hearing for Trump’s Supreme Court nominee Amy Coney Barrett on Oct. 12 after two Republican senators on the panel – Thom Tillis of North Carolina and Mike Lee of Utah, confirmed they have tested positive for the virus.

However, Sen. Lindsey Graham, R-S.C., chairman of the Senate Judiciary Committee, said he intends to go forward with Barrett's hearing as planned and senators will be allowed to join virtually if necessary.

Many of those close to the president who have tested positive attended a White House Rose Garden event last Saturday announcing Barrett's nomination. The event was not socially distanced and mostly maskless -- and it remained possible that more attendees could test positive in the coming days.
#Donald Trump  #COVID-19  #Joe Biden  #Covid  #Coronavirus
Add Comment