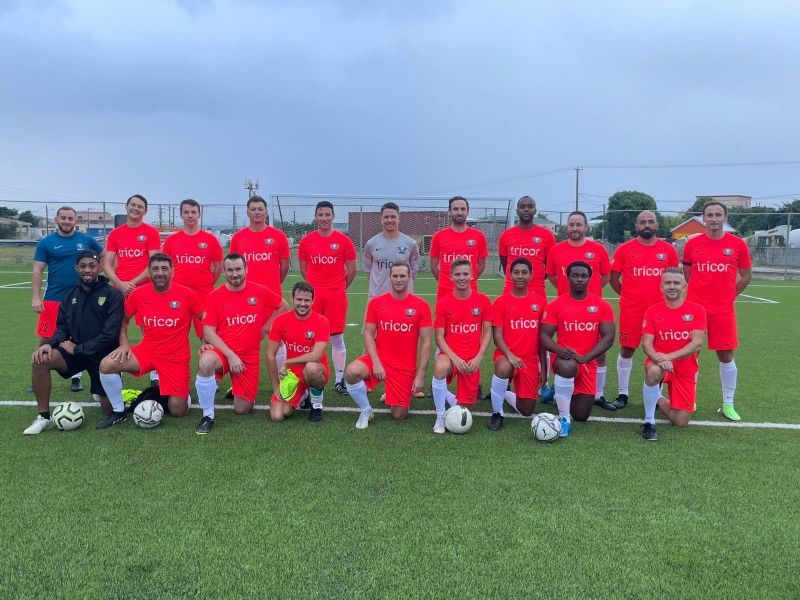 Wolues FC put a huge question mark over the destiny of the BVI Football Association (BVIFA) National League trophy on Sunday, April 17, 2022, as they overcame, Sugar Boys FC, 2-0 to throw the race for the Championship wide open.

Noel Maxwell proved to be the hero on the day with his two goals in the 13th minute and 68th, proving the difference at the football ground in East End.

“It was a similar game to last week,” noted Wolues player, Phil Nelson, “where we conceded a lot of possession but kept a strong shape and limited them to long shots. We are defending as a whole team at the moment, and it is paying off with three clean sheets in a row.”

Nelson was also quick to praise his three-pronged forward line. “It was a bit of a grind at times, but we knew that one of our three strikers would always score for us. This week it was Maxwell’s turn, and he scored twice with two excellent finishes. Sugar boys are the main contender for the league so to take four points off them this season is a great result for us." 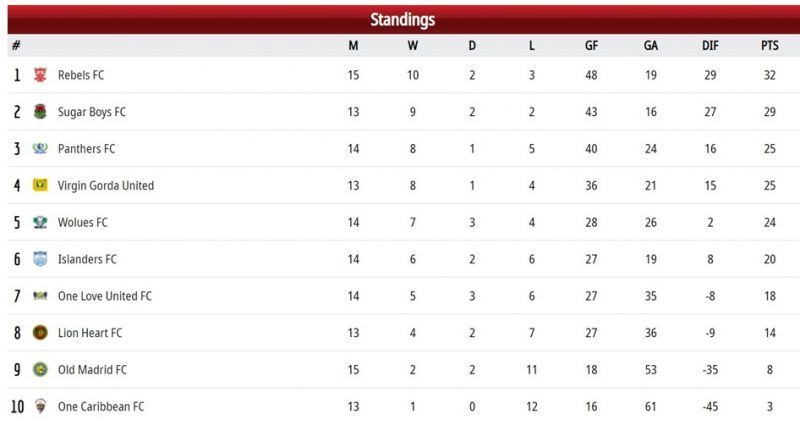 The Rebels FC took full advantage of the Sugar Boys defeat to smash five goals past Old Madrid FC and go top of the standings.

The Rebels FC took full advantage of the Sugar Boys defeat to smash five goals past Old Madrid FC and go top of the standings.

“It was a good game overall for us,” commented team Manager, Audain Lenon.

“Coming off a three-week break, we had a lot of energy and made sure we made them chase the ball in the first half to tire them out. In the second half, we played more attacking football and were dominant, winning comfortably 5-0. Praises to Gibbron Richard's, one of our most improved players, who had a remarkable game and now we look forward to continuing our unbeaten streak to ten against Lion Heart this Sunday!”

Webster Pryce opened the scoring in the 25th minute, before Curtly Peters doubled the lead in the 64th minute. Shemar Lawden made it 3-0 in the 70th and Peters scored his second in the 89th before Ikyjah Williams netted in added time at the end of the game to round out the scoring.

Rebels now lead the points standings with 32 point while Sugar Boys sit second with 29 points. Panthers FC and VG United occupy third spot with 25 points each, while Wolues are a point behind.

One Love put to task by One Caribbean

One Love FC also had an entertaining game against One Caribbean FC, eventually running out 4-3 winners. Shane Prince put One Love up early in the first half, before two goals from Kelvin Glasgow (25th and 29th mins) put One Caribbean 2-1 ahead.

Brent Bowman equalised in the 27th minute and then Adrian Padilla put minnows One Caribbean back in front at 3-2 just 4 minutes late. That lead would last until the 85th minute when Dion Thompson got himself on the score sheet and then Chavaughn Williams popped up in the 88th minute to score the winner.

“We hadn’t been training and were a bit lazy,” stated Manager of One Love, Marc Savage, “but we will get back to the drawing board this week and aim to step up our game.”