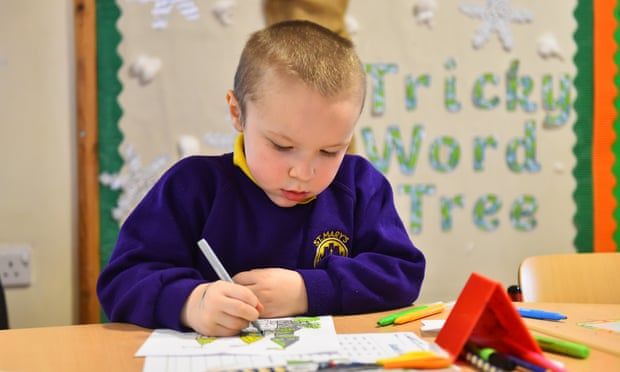 Aggressive behaviour such as biting and hitting, feelings of struggling in class or being overwhelmed around large groups of children were among the difficulties reported by teachers during interviews.

Claudine Bowyer-Crane, of the National Institute for Economic and Social Research, said the findings were worrying: “Not only does it suggest that children who started reception in 2020 are struggling in the specific learning areas of literacy and maths but also that a smaller proportion of these children are achieving a good level of development.”

The research – published by the Education Endowment Foundation – found parents and teachers concerned that children in England were struggling with their emotional wellbeing as well as their ability to learn language and numeracy skills, after starting in reception classes after the earlier spring lockdown.

“For many children the experience of lockdown was made harder by cramped living conditions, no access to green spaces, parental mental health difficulties and financial hardship. On starting school, they had to contend with the disruption caused by Covid-19 restrictions only to then go back into another lockdown after just one term of schooling,” the researchers concluded.

Teachers who spoke to the researchers said the disruption had left some infants with “low self-esteem and confidence”, and that more children than previously “feel overwhelmed” by learning.

Others highlighted increased behaviour problems seen when children returned to school, with some “biting, hitting, unable to share”, leading to teachers having to focus more on helping children settle back into school.

Ruth Coleman, headteacher at Highfield school in Ipswich, said: “When children returned to our nursery after the pandemic, many struggled with vital aspects of early years development, such as personal touch, or coping in bigger groups of children.

“We saw more children who had separation anxiety from their parents too. Some children were further behind with speech and language development than we’d expect.”

The study looked at more than 3,000 children who began their reception year in September 2020, with their school year disrupted by the second lockdown in November 2020 and the third in January to March 2021. Many of those children had previously missed out attending daycare or other early years settings during the March 2020 lockdown.

Teachers reported that some parents were unable to help their children learn during the lockdowns, finding it difficult to teach reading and writing. “Some parents were very difficult to engage and maybe we should have tried harder to get those children into school as they are now significantly behind,” one teacher commented.

The study found that more children finished reception year behind in their expected goals than in pre-pandemic years, with the equivalent of three fewer children in every classroom not reaching expected levels of academic, personal and physical development.

Prof Becky Francis, the chief executive of the EEF, said: “The early years are such a crucial time for children’s development, both in terms of their attainment outcomes and their social and emotional wellbeing. So it is particularly concerning that fewer children reached the expected levels of development by the end of reception class.”
#COVID-19  #Covid
Add Comment