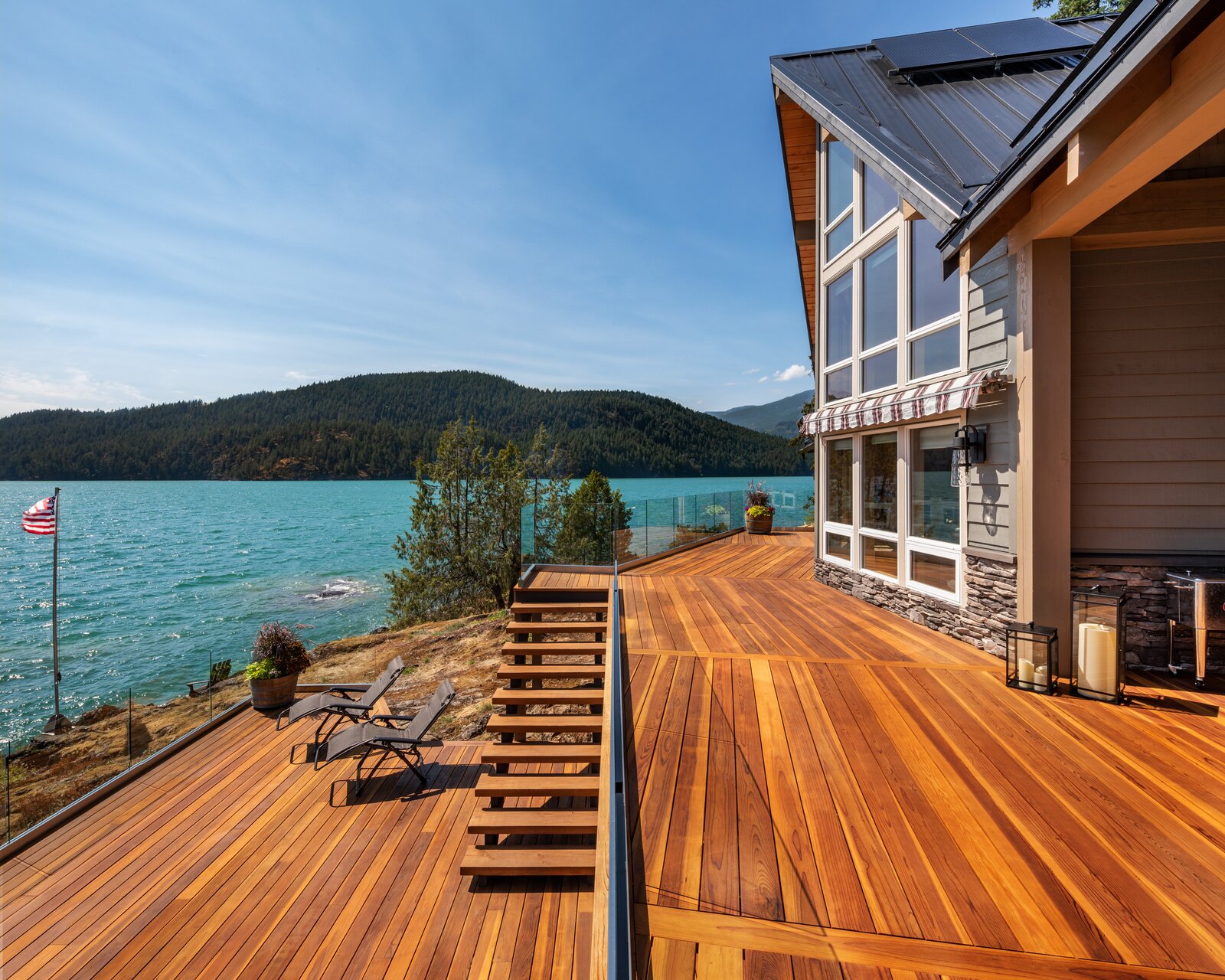 With its storied past and majestic present, Harrison Lake has long been an alluring mecca for outdoor enthusiasts, offering a flavorful feast of hiking, fishing, and boating excursions. While it attracts visitors from across the globe, the lake’s size-it is the largest lake in Southwestern British Columbia-allows for plenty of pockets that radiate both seclusion and serenity. In one of those calm plots, a multi-level residence rests along the forested shores, delicately blending into its surrounding natural habitat. 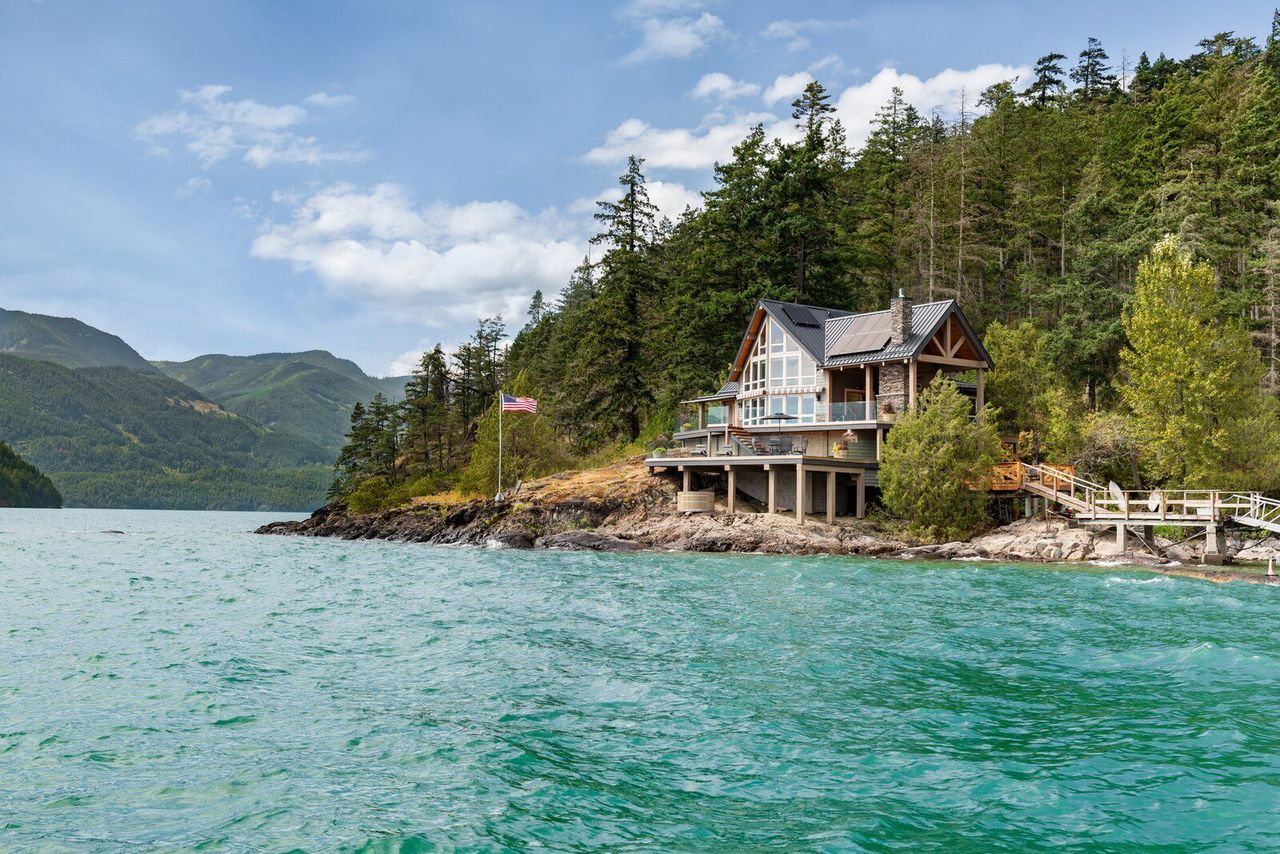 Composed mainly of wood, glass, and stone, the striking home sits tucked away in a quiet cove on Harrison Lake, located at the tip of the Cascade Peninsula, just two hours east of Vancouver.

Originally built in 1999, the home switched ownership two decades later in 2019 when a local family with strong ties to the area purchased it to be used primarily as a weekend retreat. Along with the mesmerizing views enveloping the property, current homeowner Ed Watkins explains it was the sentimental value of the site that sealed the deal. "I grew up living in the Harrison Lake area, and met my wife on the beach at Harrison Hot Springs some 44 years ago. My grandfather and father also logged the area back in the 1950s and 60s, and actually had a logging camp on the lake in Cascade Bay near where our cabin is located." 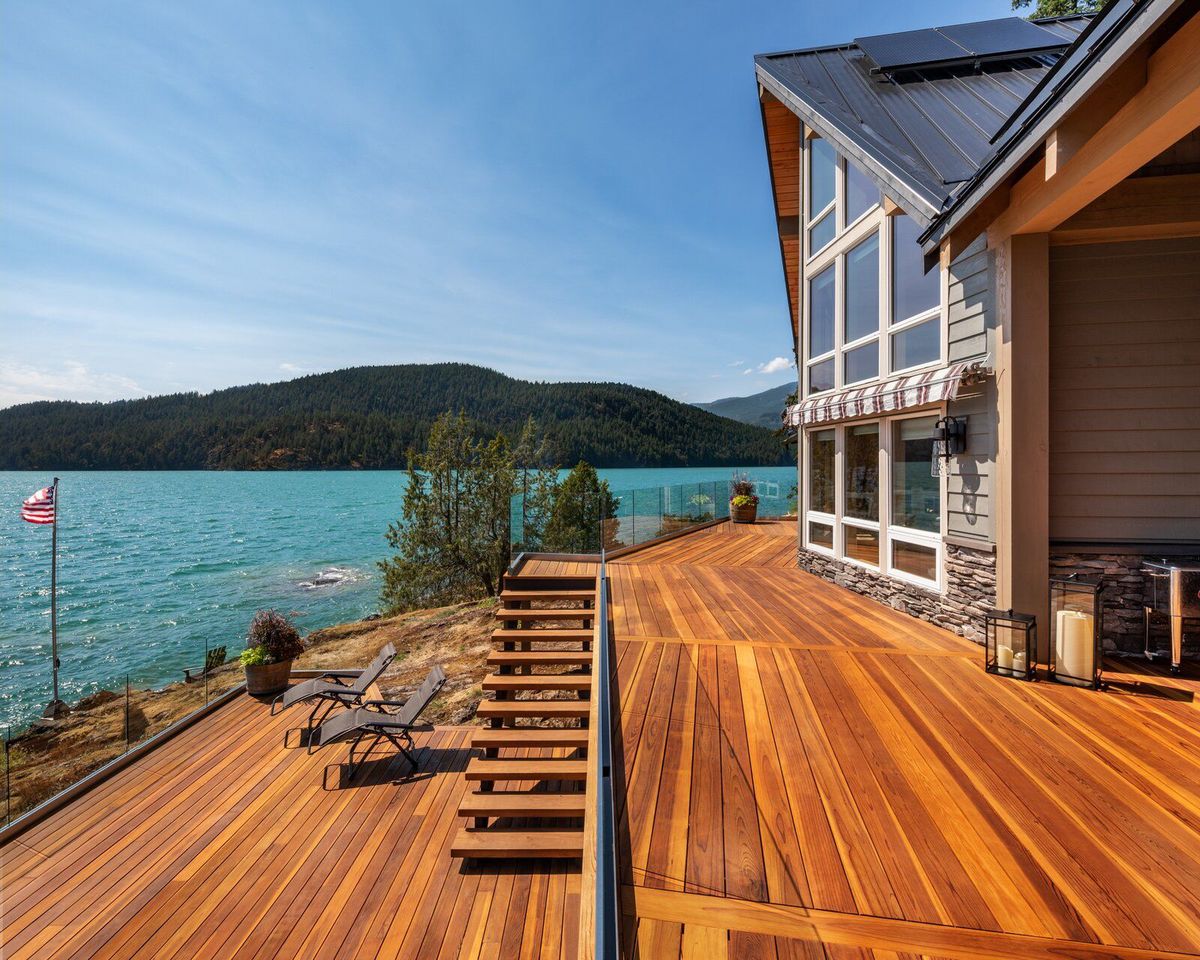 To foster a more intimate connection with nature, the current owners, who bought the home in 2019, remodeled the original decking area, expanding it to offer an additional 1,200 square feet, spread across three levels. 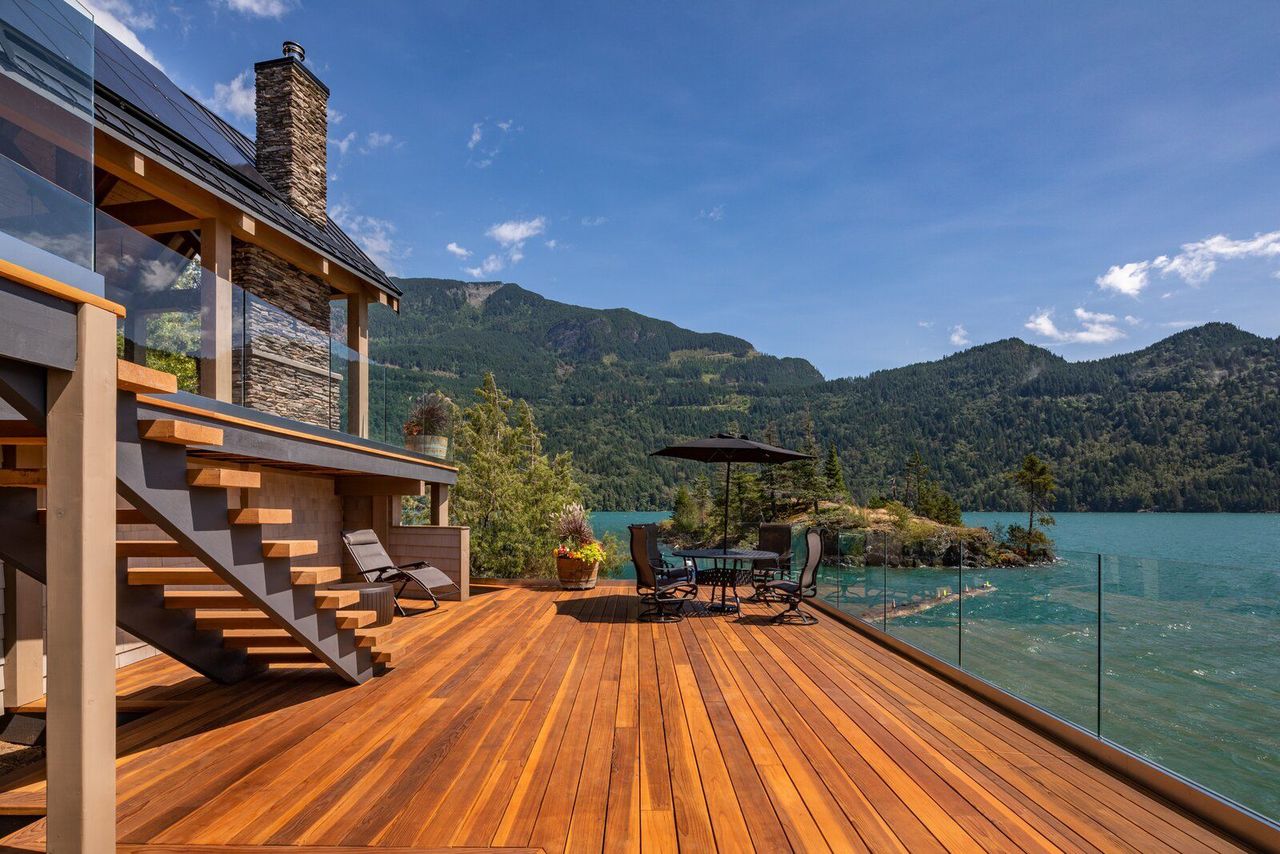 A glass railing system was installed across the various levels as a way to capture unobstructed lakeside views.

While the home overall featured good bones, it lacked the strong indoor-outdoor connection the Watkins Family desired, so once the acquisition was complete they quickly began remodeling. "We decided we wanted a covered outdoor space with a fireplace so we could enjoy the deck not only in the warm summer months, but also in cooler weather," says Watkins. The project resulted in an expansive, three-level deck, which added 1,200 square feet of outdoor living space to the home. 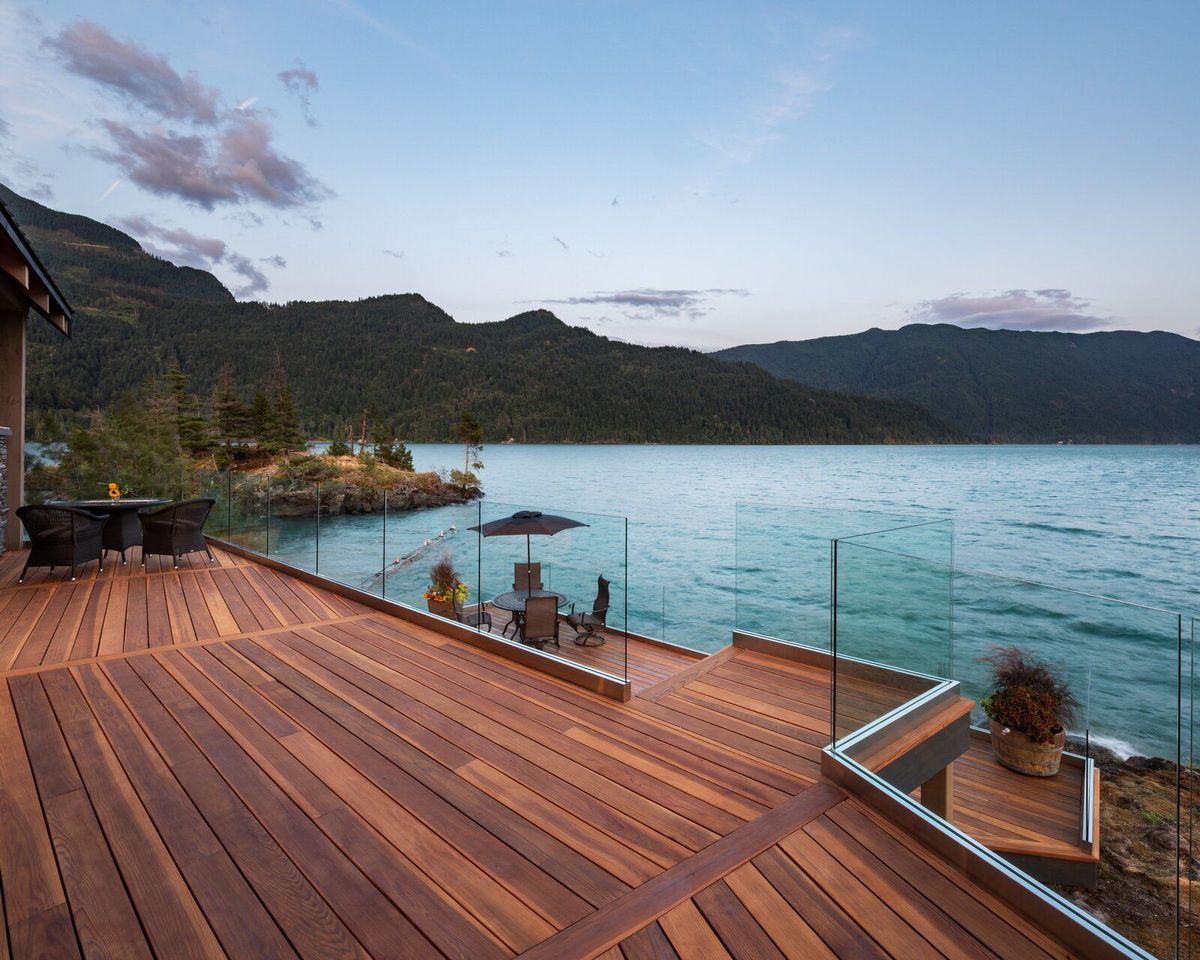 The owners replaced the original decking material, which was pressure-treated pine, with a clear redwood grade, allowing the deep, reddish hues to contrast with the sparkling blue water steps away.

"The lower front deck hangs out at the water’s edge, capturing great views of the lake and surrounding mountains," states Watkins, "and is mostly used for lounging around on sunny summer days." The upper deck, which he notes is relied on for outdoor dining and entertaining, includes a covered barbeque and outdoor kitchen, as well as enough space for ample seating. Stacked stone hugging the fireplace stretches from floor to ceiling, adding texture and sophistication. "The fireplace area has been a great year-round spot for family-and-friend gatherings." 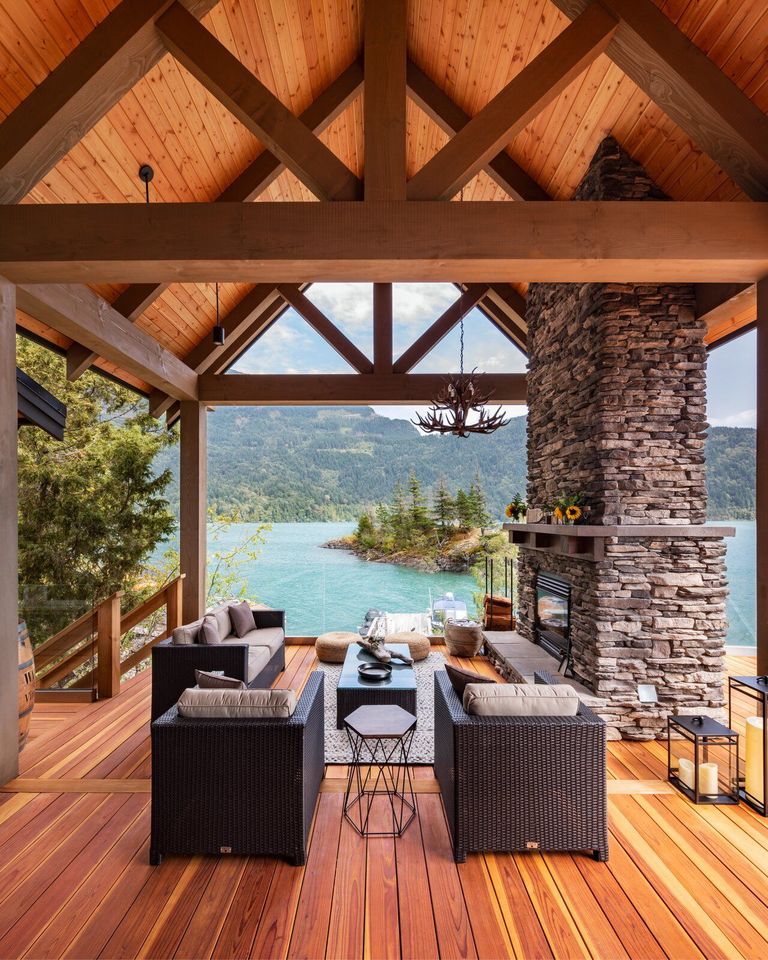 The covered section on the upper deck features a vaulted timber ceiling. 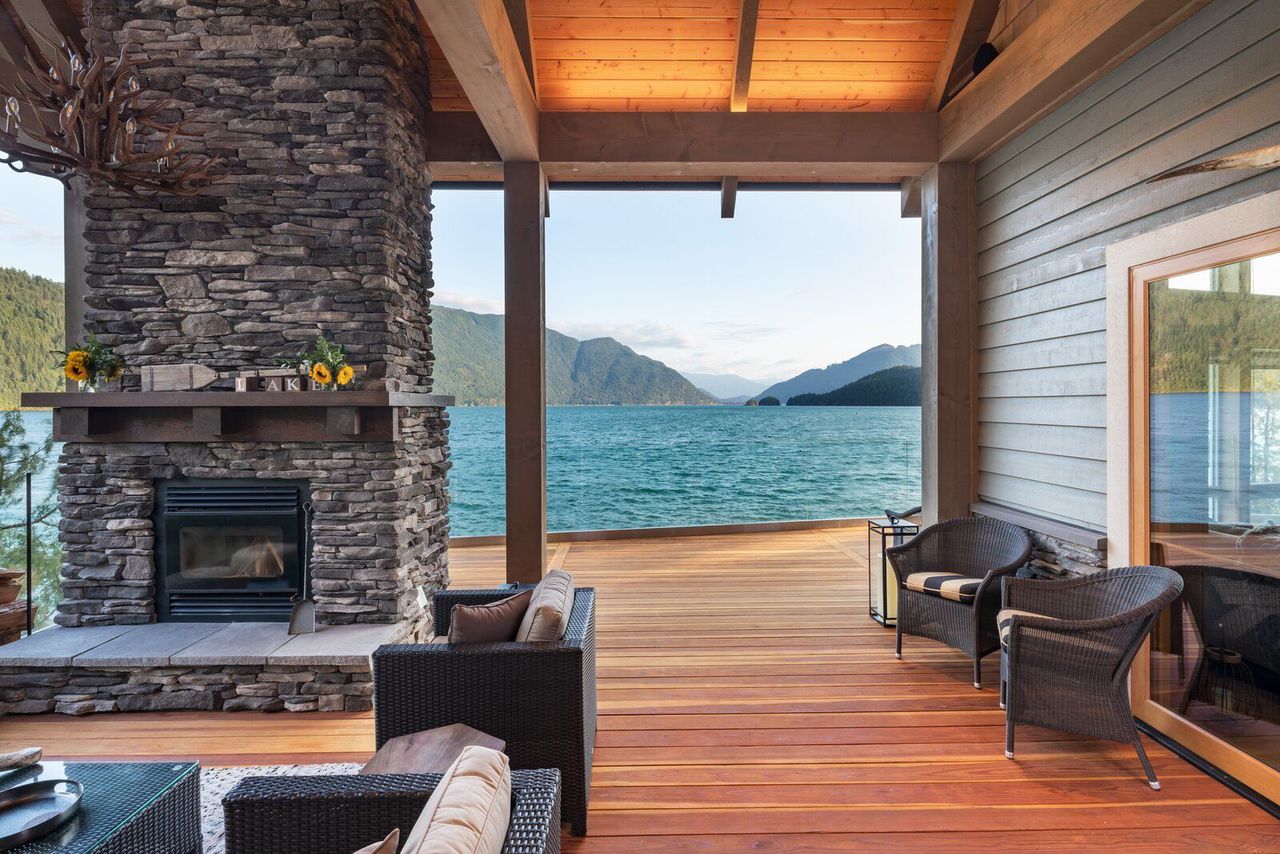 When it came time to select the material for the deck, the family opted to shift away from the original pressure-treated pine and chose sustainably harvested Humboldt Sawmill redwood for both its natural durability and rich variations of color. "We liked the contrast between the dark red and white colors of the redwood," recalls Watkins, noting how the species not only complements the home but also the local environment. In addition to the main, three-level deck, the family also used redwood deck boards on the home’s rear barbecue area, as well as the space leading down to the boat dock, which further enhanced the dwelling’s cohesive style. 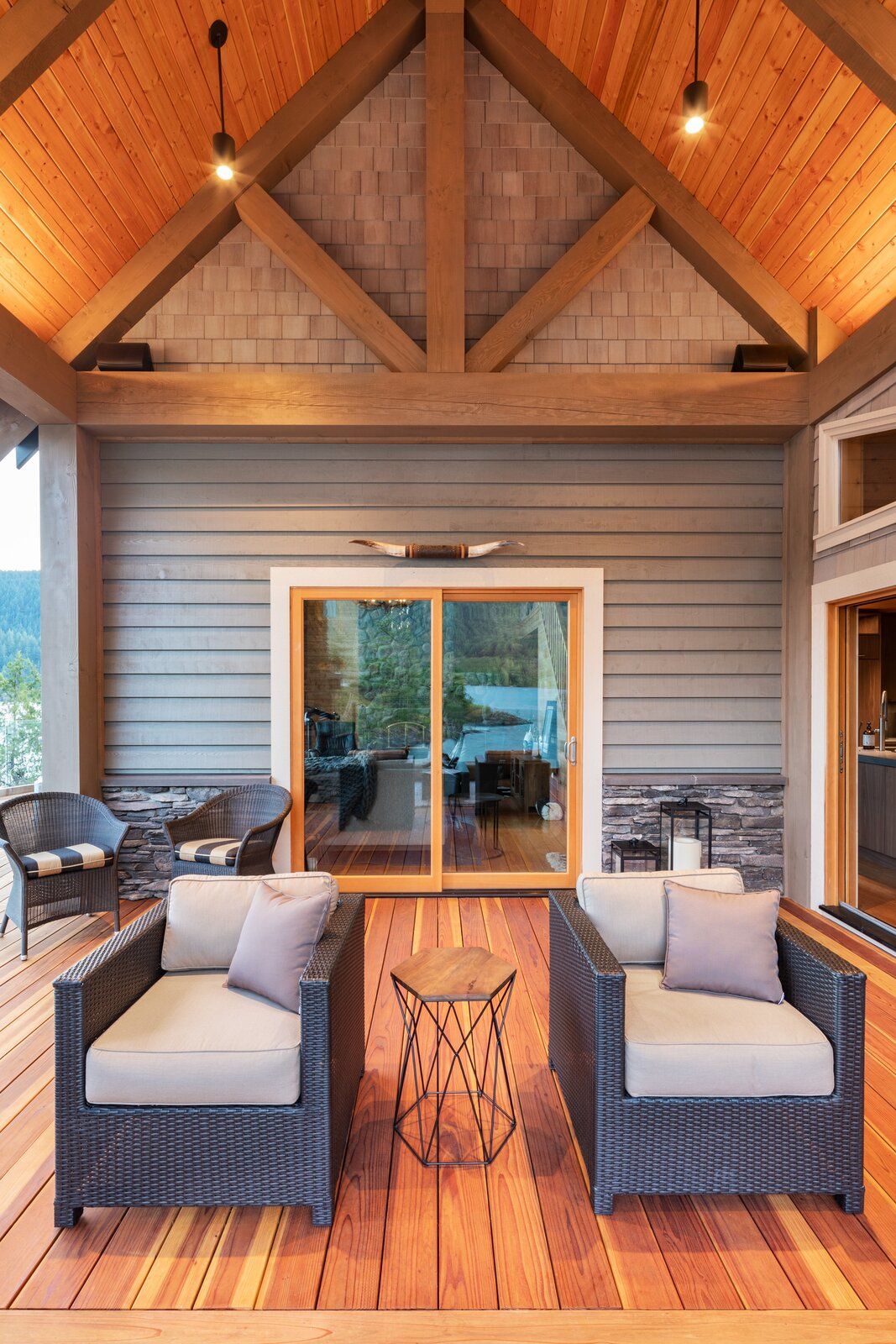 Various seating areas can be found throughout all three levels of the deck, offering differing views of the natural surroundings. 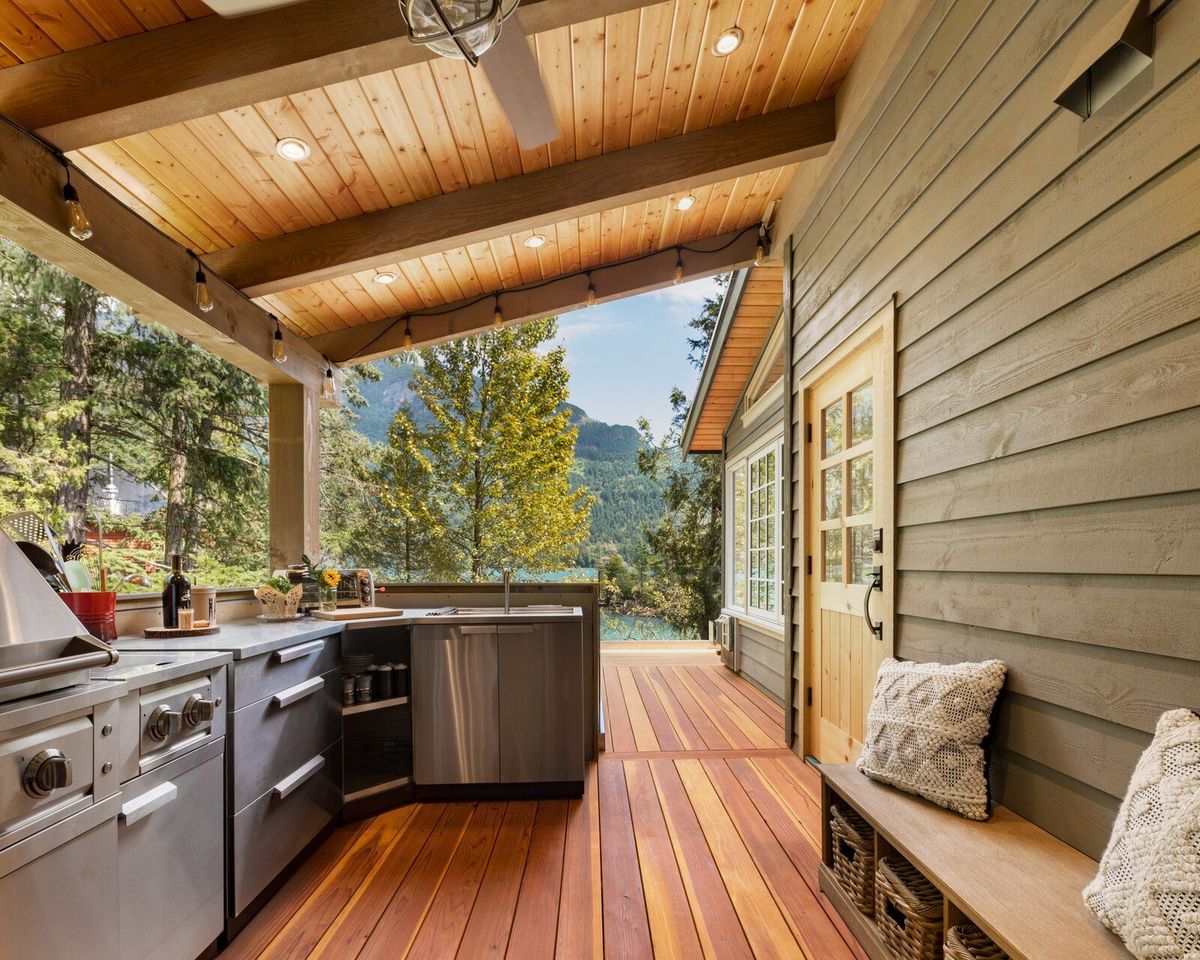 Redwood deck boards continue to the covered barbeque area located on the back of the house.

"The home is obviously in a breathtaking location, right on the water's edge, surrounded by lots of natural beauty and natural materials. The choice of anything other than a durable, natural wood species for the decking would have clashed with the design and overall setting," states the Humboldt Sawmill team. Given how the home is located in a high-fire hazard area, the family took extra steps of precaution by selecting redwood decking treated with a Class A exterior fire retardant, Thermex-FR®, from Chemco, Inc.-a material that may be used without restriction in fire hazard areas. 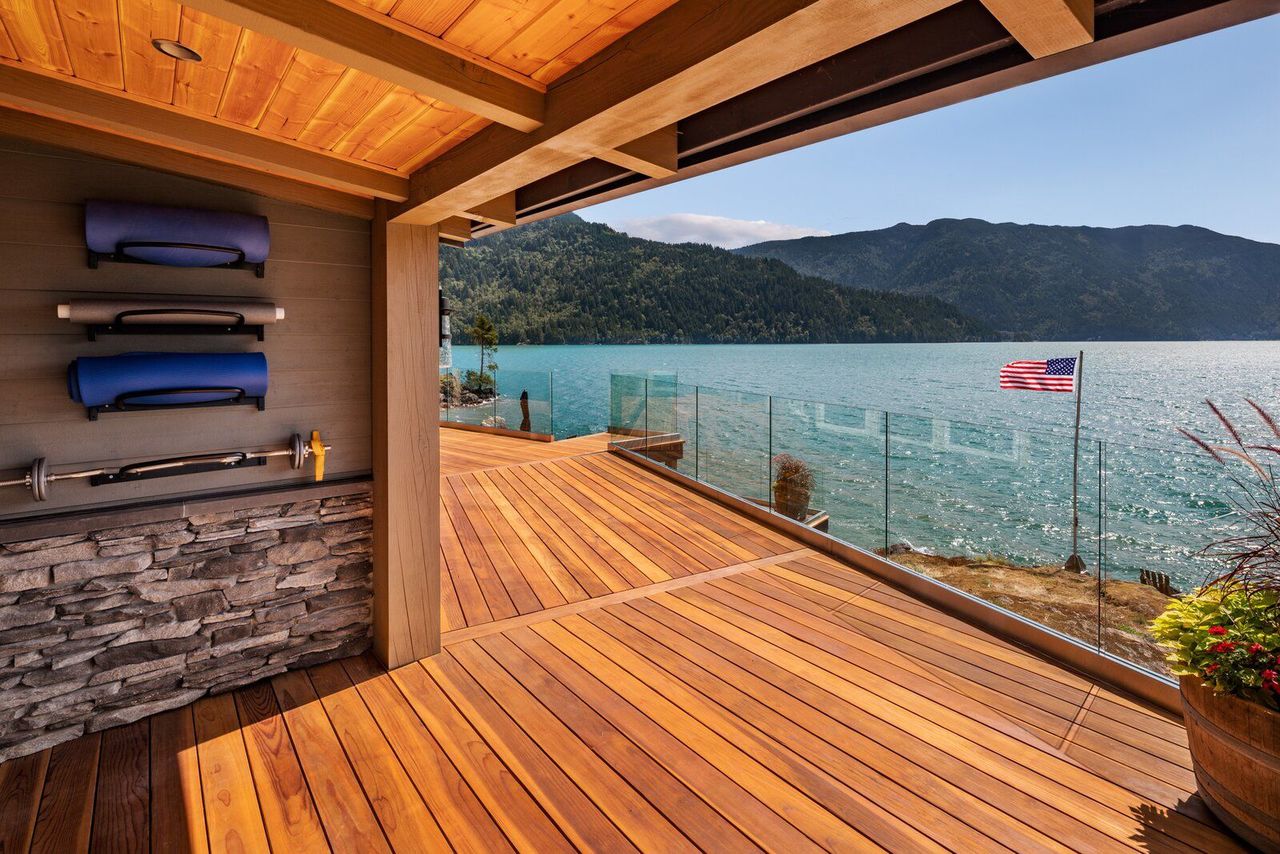 The west side of the deck near the principal suite features a covered workout area.

"We look forward to enjoying lounging, dining, and entertaining on all areas of the redwood deck, which blends in with the natural beauty of the surrounding forests and water," adds Watkins. "We couldn’t be happier with how it all turned out." 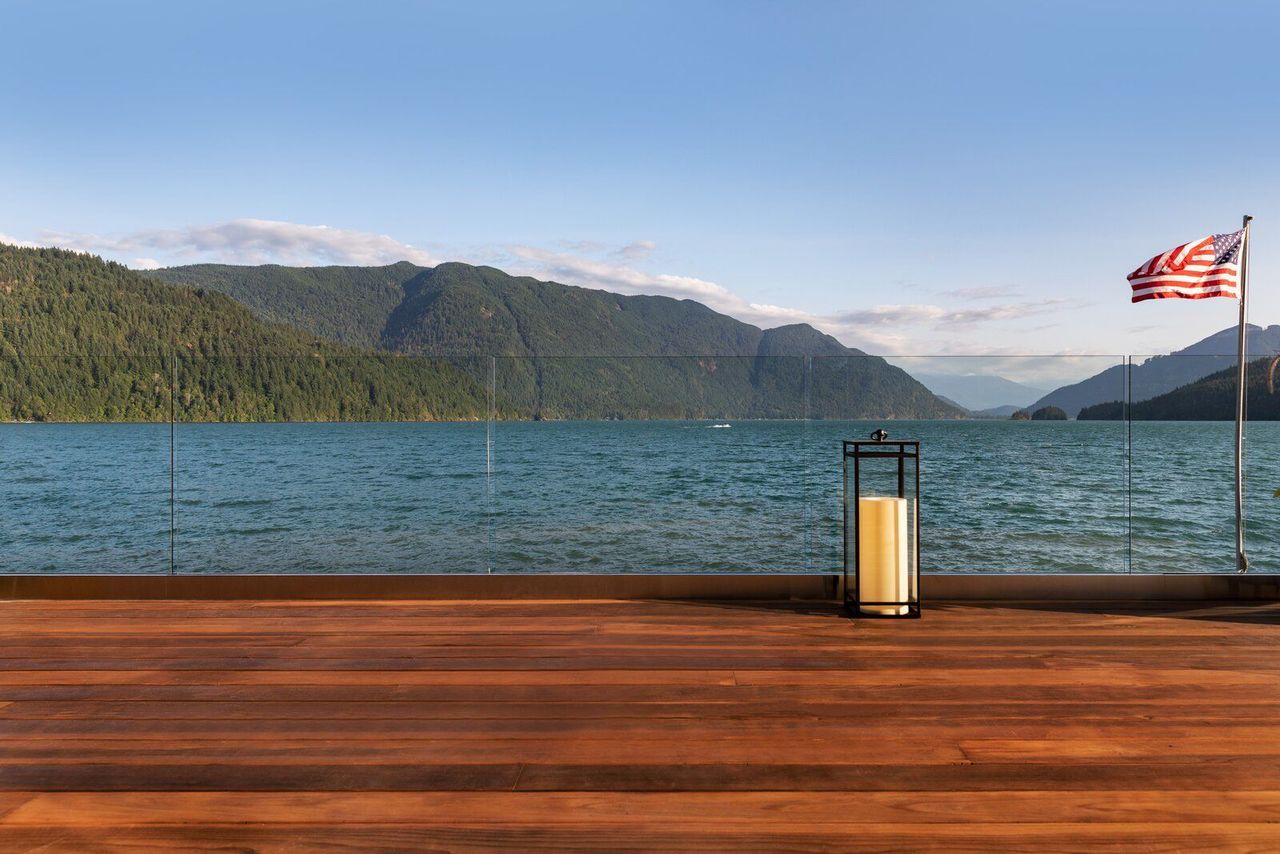 A peek at the lower-level front deck, overlooking Harrison Lake.