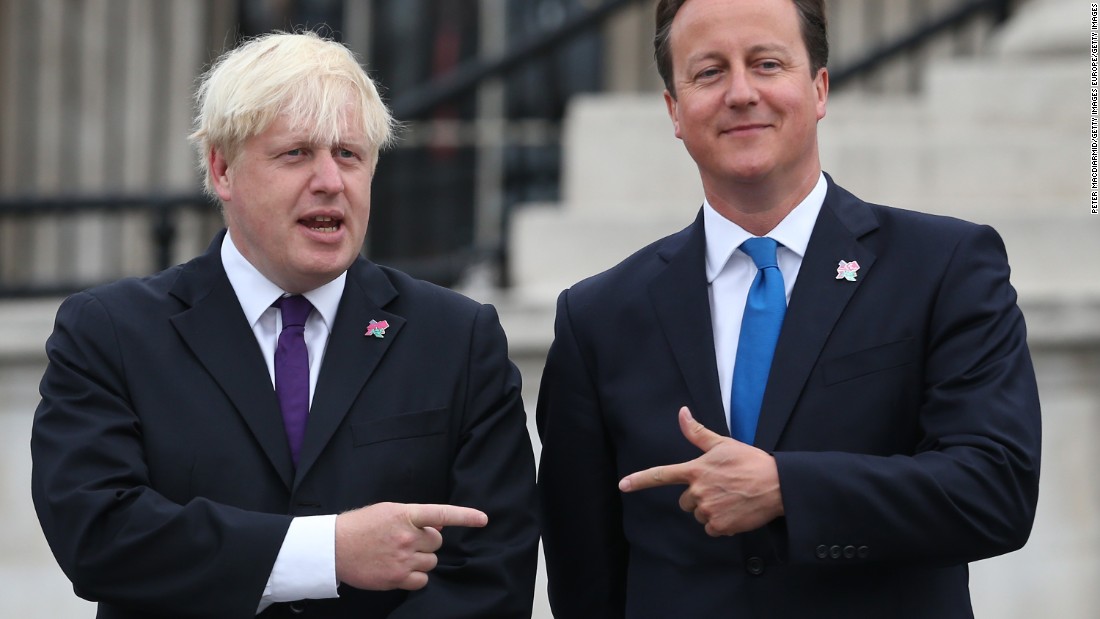 Analysis: Five years after the Brexit vote, the United Kingdom is more divided than ever

The Brexit referendum took place five years ago. It was supposed to settle the United Kingdom's neurosis over its relationship with Europe once and for all, but it did nothing of the sort.

Britain was a very different place in 2006.

Tony Blair was Prime Minister, the financial crisis that would go on to devastate the global economy had yet to arrive, and a member of parliament named Boris Johnson was eyeing up a run for mayor of London as the Conservative party's liberal, pro-European candidate.

Taking the reins as the new leader of the Conservatives after the party fell to three successive election losses, David Cameron -- another pro-European -- pleaded with its members to stop "banging on about Europe" and focus instead on "the things that most people care about."

A decade later Cameron, by then the Prime Minister, put his money where his mouth was, and gambled everything on a referendum on Britain's membership of the European Union -- betting that nobody outside Westminster cared about Europe. He was wrong.

That vote -- five years ago Wednesday -- was supposed to settle the United Kingdom's perennial neurosis over its relationship with Europe once and for all. It did nothing of the sort.

Boris Johnson finally led Britain out of the European Union in 2020 on harsher terms than anyone believed possible back in 2016. Polling shows that very few people believe the issue has been settled or that it will be any time soon. While the consequences of Brexit are unlikely to be fully comprehended for years, the UK remains as divided today as it was then.

From the moment the Brexit referendum was announced, it was obvious that the fate of Northern Ireland would be the single hardest issue to negotiate. The province is part of the UK and so has left the EU, but it shares a land border with the Republic of Ireland, an EU member state.

Keeping that border open is extremely important, due to the very real risk of sectarian violence between Catholic and Protestant communities.

In order to do so, Johnson and the EU agreed to something called the Northern Irish Protocol, which would grant Northern Ireland a special status within the EU's customs territory, removing the need for checks on goods crossing the border.

In return, the UK agreed to a de facto sea border between Great Britain and Northern Ireland -- much to the dismay of Northern Irish unionists.

Well over a year after the UK officially left Europe, London and Brussels remain engaged in a spat over the logistical realities of the protocol that Johnson himself agreed to.

The UK is supposed to implement the protocol in full at the end of June, but it is threatening to extend a grace period on the protocol to prevent food shortages -- specifically of chilled meats -- in Northern Ireland. If it does so, the EU could respond by imposing tariffs on the UK.

The British press has labelled this unedifying spectacle the "sausage wars" -- and while it sounds silly, it could further destabilize an already tense situation in Northern Ireland.

"Northern Ireland's political scene is often somewhat precarious, but in the case of Brexit, there is a new sense of common helplessness," said Katy Hayward, professor in political sociology at Queen's University, Belfast. "Its immediate future is now determined primarily by the UK and EU, not by political leaders here in Belfast."

"Leavers, remainers, unionists, nationalists and others can all reasonably say that they are in a worse place five years on," she added. "That's why politics feels so particularly tense here."

A government spokesperson told CNN that the UK was "committed to finding consensual solutions with the EU" but that the "EU must show common sense and take a pragmatic approach."

Northern Ireland might be the most complicated immediate consequence of Brexit, but Johnson also faces a constitutional nightmare when it comes to Scotland.

Scottish voters rejected independence in 2014, when British unionists -- led by Cameron -- argued that leaving the UK would threaten Scotland's place in the EU.

But the Scottish National Party, which wants Scotland to break away from the UK, has only grown in popularity since the Brexit vote.

In 2021, it's become easy to claim that Scots, who overwhelmingly voted to remain in the EU during the Brexit referendum, were dragged out by the rest of the UK.

"Since Brexit, the debate in Scotland has become far more polarized around the independence question," said Nicola McEwen, professor of territorial politics at the University of Edinburgh.

"Many Remain voters who didn't support independence in 2014 now do, while independence support in general is now strongly pro-EU membership," she added. "Leaving the UK is now for many the most obvious path back into the EU."

The push by Scottish leaders to win independence is unlikely to succeed for now, but the divide means Johnson is fighting grievance politics every week, distracting from the other crises facing his government.

And even beyond these specific consequences, the UK is still very much banging on about Europe.

"The attempts to stop Brits from fixating on Europe clearly failed," said Ben Page of polling firm Ipsos MORI. "The majority of people know it's far from settled. And polls have consistently shown that people who voted both leave and remain are worried about it."

Perhaps more alarming, Page said, is that despite the fact that five years have passed since the referendum, how people voted in 2016 still forms a large part of their identity. "We've had two elections, a row over culture wars and people still say that their leave or remain identity trumps any kind of party loyalty," he explained.

This debate over the relative merits of Brexit rages each time there is a story about exporters struggling to sell goods to Europe or whether the UK was able to vaccinate faster than Europe because of Brexit. The British government often leads the charge in these arguments, not least because Johnson led the 2016 Brexit campaign.

EU officials and diplomats fear this sort of tit-for-tat politics will be an unfortunate but permanent fixture of UK-EU relations for the foreseeable future. They also suspect it is, in part at least, an exercise in distracting the British public from the reality of life as a small nation negotiating with the world's largest trading bloc.

"For us, Brexit should be over. But we are now in a situation where we have to negotiate with a UK that is fooling itself into thinking it's as powerful as the EU," said one senior EU diplomat.

Another said the UK had no "well-defined economic strategy" to replace EU membership, meaning that Brussels was prepared for "a long period of antagonism."

Free from Brussels' yoke, there are new opportunities out there for the UK, but beyond trade deals with countries on the other side of the world -- which the government's own forecasts say will have negligible benefit -- Johnson's government is yet to articulate a major economic policy that will result in Brexit dividends.

A UK government spokesperson responded to this by pointing to its "Plan For Growth," which "sets out how we will support businesses across the UK to grow and succeed." Giles Wilkes, a senior fellow at the leading Institute for Government think tank, described it as a "cobbled-together" plan that "reflects the chaos of the moment."

If the antagonism really is about distracting Brits from their long-term economic woes, the EU should probably prepare for years of hostility.

Rob Ford, professor of politics at the University of Manchester, says one of the most remarkable things about Brexit is the triumph of politics over economics.

"The whole model of 'It's the economy, stupid,' lost. Even when the vote happened, nearly every serious political commentator thought we would leave the political bits, not the economic bits. They were all wrong."

Ford, and many others, blame David Cameron for this.

"If someone in Cameron's brain trust had looked properly at how to prepare for a referendum and thought about what outcomes were most palatable to the largest number of voters, the campaign might have played put very differently," he says. "Some of the damage from a polarizing campaign over a reductive and divisive binary question might have been avoided."

Five years on, the UK is still scarred by Brexit. Most have accepted it, but few are satisfied with how it ended, and the truth is that no version of Brexit would please everyone.

And while near enough everyone involved in Brexit has made a misstep at some point, many have since had reason to lament the biggest bungle of all: Calling a referendum with absolutely no plan for what would happen if Britain voted to leave.