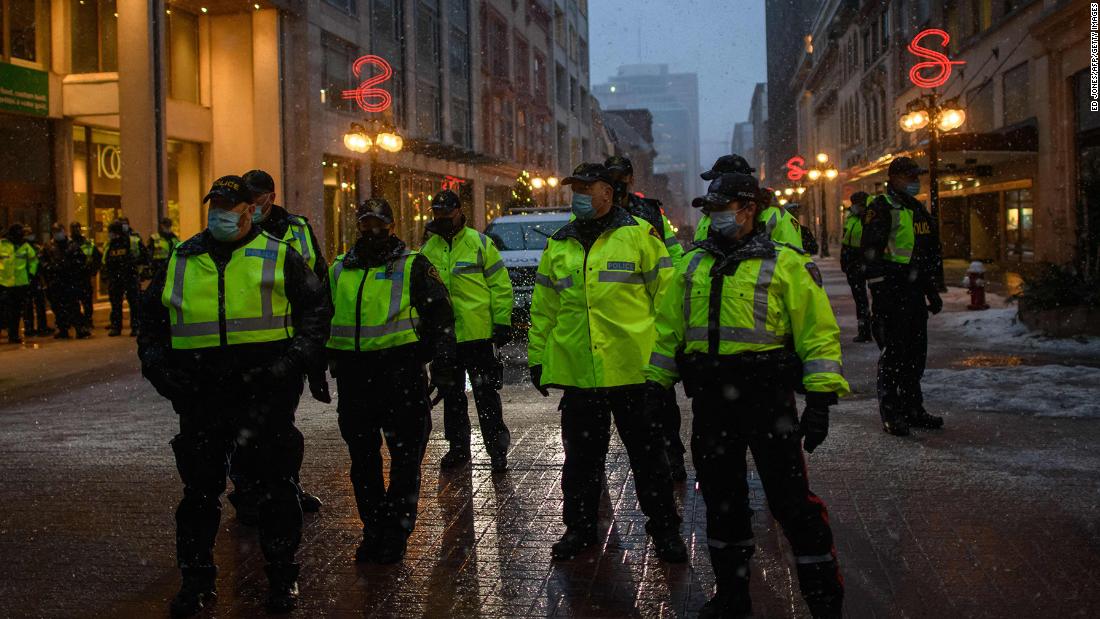 Demonstrations in Ottawa turned violent Friday evening as protesters, according to authorities, assaulted officers and tried to remove their weapons.

"All means of de-escalation have been used to move forward in our goal of returning Ottawa to it's normalcy," police in Canada's capital said in a tweet.

Police tweeted a photograph of mounted officers forming a line. Officials said that was done to create a safe space between other officers and protesters angry about the nation's Covid-19 health measures. One person was arrested when a bicycle was thrown in the horses' direction, police said.

Interim Ottawa Police Chief Steve Bell said earlier at least 70 people had been arrested for various offenses and 21 vehicles had been towed.

"We're in control of the situation on the ground and continue to push forward to clear our streets," Bell said at an afternoon news conference.

City, provincial and federal law enforcement officers began an unprecedented operation Friday morning to remove protesters and their trucks and cars that have been blockading Ottawa's streets for weeks.

Riot police, some with tactical gear, as well as mounted officers, held back protesters as they continued their demonstration against Covid-19 health restrictions.

Several trucks and cars have voluntarily left the protest but dozens continue to block streets in and around Parliament.

"The children will be brought to a place of safety," the tweet said.

CNN has observed those children on the protest site in the last several days. Bell said police have not needed to interact with The Children's Aid Society of Ottawa in connection with children in the crowd. The society, according to its website, is a non-profit community organization funded by Ontario's government and is legally mandated to protect children and youth from abuse and neglect.

"Even through all the planning, it still shocks and surprises me that we are seeing children put in harm's way, in the middle of a demonstration where a police operation is unfolding," Bell said. "We will continue to look after their safety and security but we implore all the parents who have kids in there, get the kids out of there."

In a morning tweet, Ottawa Police warned "under provincial and federal legislation, you will face severe penalties if you do not cease further unlawful activity and remove your vehicle and/or property immediately from all unlawful protest sites."

Local media showed live pictures of several arrests that occurred without incident. Police searches and arrests are taking place at a location less than a half-mile from the main protest site at Parliament Hill. 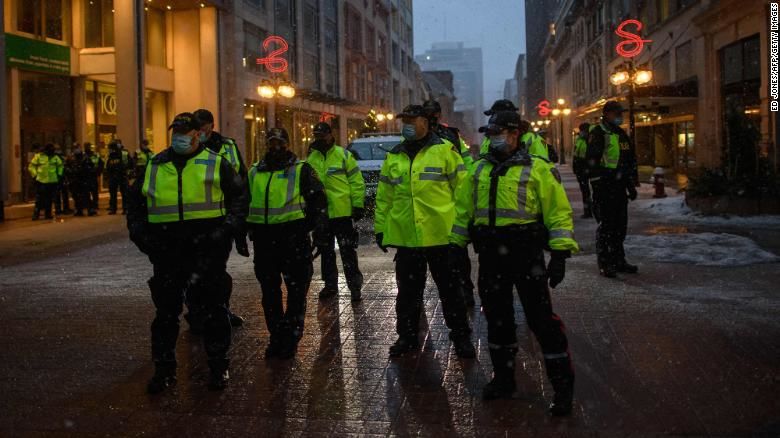 Police officers gather on a street during a protest over pandemic health rules outside the parliament of Canada in Ottawa on February 17, 2022.

In his news conference earlier Friday, Bell said no protesters were hurt during the day and one officer suffered minor injuries.

Debate in Parliament on using the Emergencies Act was slated to continue Friday, but the House of Commons will not meet because of police activity in downtown Ottawa, House of Commons Speaker Anthony Rota said in a statement.

Both were slated to make a court appearance Friday.

Video posted on social media shows Lich interacting with a police officer, then being handcuffed and led away to a police cruiser.

Lich has encouraged protesters to convene in Ottawa, and recently called for supporters to continue their protest despite it being declared unlawful. She created a GoFundMe campaign for the "Freedom Convoy" which raised millions of dollars before it was suspended by the platform.

The convoy first arrived in Ottawa on January 29 to express their disapproval of a vaccine mandate to enter the country or face testing requirements. Over the course of more than two weeks, the protest has since spiraled into a wider grievance against all Covid-19 measures, including mask-wearing and vaccinations.

Ottawa police began erecting barriers and fencing throughout the downtown core Thursday in an effort to clear the area of demonstrators, who have used trucks to block city roads and remained defiant amid calls by police to disperse.

Overnight, the three police forces hardened the perimeter in the downtown core, which includes checkpoints at on-ramps from highways and side streets.

The secured area would ensure that those seeking entry for an "unlawful reason such as joining a protest cannot enter the downtown core," according to Bell.

With nearly 100 checkpoints, the perimeter encompasses most of Ottawa's downtown area and is far larger than the protest footprint to date.

Those who live, work or have a lawful reason to be in the area would be allowed access, authorities said.

Amid opposition in Parliament, Prime Minister Justin Trudeau defended his decision to invoke emergency powers to put an end to the demonstrations during an address Thursday to legislators.

Officials have said a primary aim of invoking the Emergencies Act is to stifle funding to the demonstrators in Ottawa.

"These illegal blockades are being heavily supported by individuals in the United States and from elsewhere around the world," Trudeau said. "We see that roughly half of the funding that is flowing to the barricaders here is coming from the United States. The goal of all measures, including financial measures in the Emergencies Act, is to deal with the current threat only, and to get the situation fully under control."

The act, passed in 1988 and never before invoked, can temporarily suspend citizens' rights to free movement or assembly. It can also provide for the use of the military, but Trudeau has said this would not be necessary.

"We did it to protect families and small businesses. To protect jobs and the economy. We did it because the situation could not be dealt with under any other law in Canada," Trudeau said. "For the good of all Canadians, the illegal blockades and occupations have to stop, and the borders have to remain open."

Border crossing blockades in Alberta and Ontario came to an end this week, with arrests being made as police cleared the areas. Four individuals have been charged with conspiracy to commit murder at the blockade at Coutts, Alberta, and multiple weapons and rounds of ammunition were seized.

Another blockade in Manitoba ended without incident, authorities said. The port of entry connecting Surrey, British Columbia to Blaine, Washington, has also been reopened.

Candice Bergen, interim leader of the Conservative Party, said Wednesday the party won't be supporting a motion by the federal government to fully use those powers, according to CNN newsgathering partner CTV.

"The first act that he does when he has a chance to do something -- he doesn't go through step one, two, three -- he goes straight to 100 and invokes the Emergencies Act," Bergen told CTV News. "I don't think anything that we will see will change our mind, we will be opposing it."

The federal government will work with premiers across the country "until the situation is resolved," Trudeau said.

"Like I said on Monday, the scope of the Emergencies Act is time-limited and targeted as well as reasonable and portioned. It strengthens and supports law enforcement agencies, so they have more tools to restore order and protect critical infrastructure."

Dana Rush 288 days ago
All lies! Police were brutal to peaceful protesters including trampling at least two while rushing at a crowd while on horseback. Word is that two protesters are dead. ALL PROTESTERS WERE UNARMED. PLENTY OF LIVE FOOTAGE ON YOUTUBE, Facebook and TikTok to prove that the police were evil aggressors!
View all comments (1)Add comment