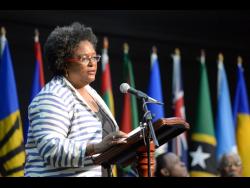 CARICOM Heads of Government will be concluding their Intersessional Meeting in Barbados today. This meeting is chaired by Prime Minister Mia Mottley, who has responsibility for the CARICOM Single Market and Economy (CSME) in the quasi-Cabinet.

Articles leading up to this meeting give the impression that the heads will primarily focus on political foreign policy issues in their relations with the USA, Canada, Britain, China, including candidates for positions at the Organization of American States (OAS), the United Nations Security Council, and the Commonwealth.

The Africa relationship is also linked to candidatures, as Kenya, like Canada, is seeking a seat on the Security Council. Votes have value. Regrettably, Prime Minister Justin Trudeau had to cancel his visit.

The heads will indeed be addressing economic issues, including tax-haven blacklisting and de-risking by correspondent banks.

Referring to my article on January 9 about the CARICOM 2020 foreign trade-policy agenda, the heads, in addition, should be addressing important trade-policy issues. After all, improving trade and investment should be a high priority.

They should be discussing trade with the USA; extension of the Caribbean Trade Partnership Act (CBPTA), which expires in September; the ACP/EU post-Cotonou negotiations as the lead negotiators met on Friday, February 14; the future of trade with Britain, including its relationship with the African, Caribbean and Pacific (ACP) group and the Commonwealth; trade with the European Union (EU), including the review of the Economic Partnership Agreement (EPA); and the situation at the World Trade Organization (WTO).

I read in a CARICOM Today report that the Prime Ministerial Subcommittee on External Trade Negotiations, chaired by Jamaica’s Prime Minister, Andrew Holness, will be presenting its report. This would indicate that the subcommittee had a rare meeting and considered these trade policy issues.

In my opinion, this subcommittee would benefit from a name change. It should be called the Subcommittee on External Trade Relations. I believe that CARICOM heads ought to be addressing these trade-policy issues on a regular basis, even if only receiving a status report for discussion. They should be considering an external trade strategy for the region.

The critical trade and economic integration issue, which the heads will be considering, is the CARICOM Single Market and Economy (CSME). At their 40th Meeting in July 2019, the heads expressed concern about the slow pace and low level of implementation, and noted that some member states did not display a sense of urgency, though recognising capacity constraints.

At this meeting, related to CSME, heads also received an interim report from the re-established Commission on the Economy, chaired by Professor Avinash Persaud, special envoy to PM Mottley on investment and financial services.

This commission, first established in 2013, is to recommend measures for achieving sustainable development. Prime Minister Mottley, demonstrating her commitment to CSME progress, held several meetings/consultations, including a town hall session in November 2019.

At this Intersessional Meeting, the heads will receive a further update on CSME implementation. I am not optimistic that much more progress has been made. I still see no evidence that the CARICOM Private Sector Organisation is operational.

I also did not find that the advisory opinion requested by the CARICOM Secretariat from the Caribbean Court of Justice (CCJ) has been delivered. This advisory opinion has implications for CSME implementation. In October 2019, when the court held hearings, it was reported that the opinion would be provided within a reasonable period of time.

The Commission on the Economy should now be unveiling its report and recommendations.

The heads also ought to be considering the implications for the region of having members with significant oil deposits, Guyana, Suriname and Grenada.

St Lucia’s Prime Minister, Allen Chastanet, in his statement when demitting office as CARICOM chair in December 2019, declared that the region’s future was bright. PM Mottley, on assuming the CARICOM chair in January, thinking of Caribbean resilience, urged the region to continue dreaming, while being determined to deliver.

In spite of this optimism, if, collectively, the region still cannot effectively address its trade and economic challenges to realise its potential, the future may not be as bright, even with oil deposits.
Add Comment