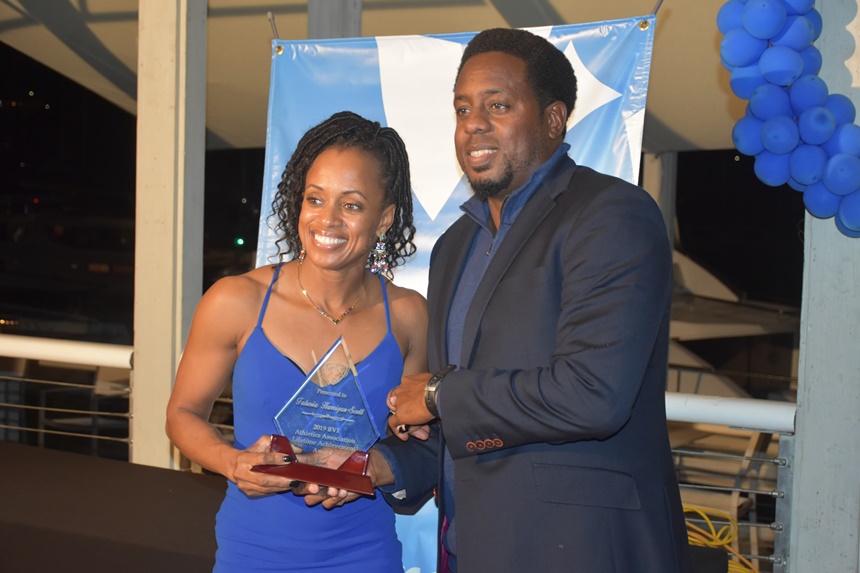 Recently-retired local athlete Tahesia Harrigan-Scott has been given the coveted BVI Athletics Lifetime Achievement Award at the 2019 BVI Athletics Association’s Athlete Gala held at The Moorings on Sunday, December 30.

Harrigan-Scott became the first Virgin Islands female athlete to win a gold medal at an international event when she won the women’s 100 metres at the Central American and Caribbean Games in 2006. She later repeated that feat in 2010.

While delivering her acceptance speech for the award, she encouraged the young athletes to always believe in their ability to achieve their goals and to appreciate each accomplishment earned.

“Believe in yourself. The hard work is there. I see that you guys put in the hard work but what you need to work on is the mental frame and a lot of the time it is not your talent, but if you believe in yourself and what you truly believe that you can accomplish,” said Harrigan-Scott, who, also boasts a bronze medal in the 60-metre dash at the 2008 IAAF World Indoor Championships - her most significant athletic achievement.

“It’s been an amazing journey for me. I didn’t appreciate it during the moment, but I want to tell you, go out there enjoy the cities, enjoy the track meets, enjoy the experience and celebrate. Don’t let anybody tell you not to celebrate an achievement because you put in the hard work, so when you feel like you won a medal celebrate that moment, appreciate it and then reset,” the veteran athlete added.

Senior Athletes of the Year Awards

Meanwhile, professional athletes Chantel Malone, Kyron McMaster and Eldred Henry all walked away with Athlete of the Year awards in their respective categories, but it was Malone who collected the most individual awards on the evening with a total of three.

Malone who is the reigning Pan American gold medalist in the women’s long jump was awarded Sol Senior Female Athlete of the Year, Most Improved Female Athlete and the most outstanding women’s open field athlete.

McMaster won the Sol Senior Male Athlete of the Year award, along with the Most Outstanding Men’s Open Track Athlete award.

Henry was awarded the Premier Dental Collegiate Athlete of the Year and the Most Outstanding Men’s Open Field Athlete.

In the BVI Road Racing division, Julius Farley won the Male Athlete of the Year, while Katrina Lindsay won the female section.

Junior Athletes of the Year Awards

The junior male and female athletes of the year awards went to Djimon Gumbs and Beyonce Defreitas, respectively.

CARIFTA Games gold medalist in the 200-metre, Jaleel Croal, won the Sol Youth Male Athlete of the Year award and was also named the Most Outstanding Boys Under-18 Athlete.

Coaches of the Year