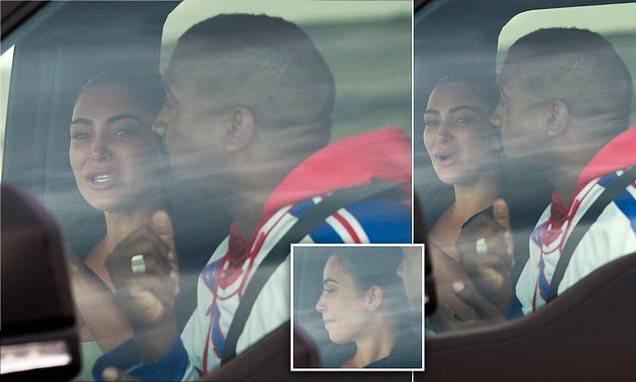 Kim Kardashian West has been pictured sobbing during an intense conversation with her husband Kanye West, after flying in to join the troubled rapper in Wyoming
Distraught Kim Kardashian breaks down in tears as she meets with Kanye West in Wyoming for marriage crisis talks after he accused her of an affair on Twitter and discussed abortion at his wild campaign rally.

Kim Kardashian West reunited with her husband Kanye West on Monday, after flying into Wyoming where she was pictured sobbing during an intense conversation with the troubled rapper.

The 39-year-old reality star appeared distressed and cried as she talked to Kanye, 43, in a vehicle, following his political campaign rally and Twitter meltdown last week, where he discussed how they once considered having an abortion and hinted she had an affair with rapper Meek Mill, which Kanye has since publicly apologized for.

It is the first time that the married couple has been pictured together since before his disastrous first campaign rally in North Charleston, South Carolina, after announcing his unlikely bid for presidency.

The pair - who share children North, seven, Saint, four, Chicago, two, and Psalm, one - were seen having what appears to be crisis talks in his car after leaving a Wendy's fast-food restaurant in Wyoming where he owns a $14 million ranch.

'She is very emotional about everything, and also exhausted,' a source told People magazine Monday. 'She feels very hurt by Kanye. She has tried to reach him multiple times and he just ignores her. It's all a bad situation.'

The insider added: 'She decided to fly to Cody to speak with him in person. She doesn't want to be ignored anymore.'

Meanwhile, Kanye is still eager for his presidential bid to become a reality, after making another last-ditch attempt to get on another ballot in Missouri, TMZ reported on Monday.

Last week, Kim took to Instagram following Kanye's controversial behavior, admitting that she was 'powerless' amid his meltdown, calling her husband 'brilliant but complicated'.

The reality star said 'his words sometimes do not align with his intentions' after Kanye last night claimed he has been 'trying to get divorced' from Kim since she met his fellow rapper Meek Mill at a hotel.

Kanye said last Tuesday that Kim was 'out of line' to meet Meek Mill at a hotel in Los Angeles to talk about 'prison reform', and blasted her mother Kris Jenner as 'Kris Jong-Un' while accusing the pair of 'white supremacy.'

However, Kanye apologized to his wife in a tweet last week, amid reports that he went to hospital to be treated for anxiety.

The rapper tweeted: 'I would like to apologize to my wife Kim for going public with something that was a private matter. I did not cover her like she has covered me.to [sic] Kim I want to say I know I hurt you. Please forgive me. Thank you for always being there for me.'

His apology came after Kim gave a frank and honest statement about the situation to her fans, sharing three pages to her Instagram story last Wednesday saying: 'Those that understand mental illness or even compulsive behavior know that the family is powerless unless the member is a minor.'

She told her 180 million followers: 'I understand Kanye is subject to criticism because he is a public figure and his actions at times can cause strong opinions and emotions. He is a brilliant but complicated person who on top of the pressures of being an artist and a black man, who experienced the painful loss of his mother, and has to deal with the pressure and isolation that is heightened by his bi-polar disorder.

'Those who are close with Kanye know his heart and understand his words some times do not align with his intentions.'

Prior to his meltdown on Twitter, Kanye sparked concern during a rambling and chaotic speech at his first presidential rally at North Charleston's Exquis Event Center in South Carolina.

He shockingly revealed that he and his wife Kim had considered aborting their daughter North, who is now seven, before he got a 'message from God'.

His unscripted speech, which came two weeks after he announced his unlikely bid for president, is said to have left his wife and her family upset and alarmed.

During the event, the rapper appeared to acknowledge that his comments would be met with a negative reaction by his family. He explained that if his wife were to divorce him after making the comments, he would still be thankful that she had North.

'Even if my wife were to divorce me after this speech, she brought North into this world, when I did not want to,' he said.

Kanye has been open about his struggle with bipolar disorder and, in 2016, he spent time in hospital after a 'psychiatric emergency' that forced him to cancel 21 concert dates.

Kim has previously defended her husband's rants and said in a 2018 tweet that he was a 'free-thinker' and entitled to his own opinion. She also appeared to endorse her husband's presidential bid when he first announced it two weeks ago by retweeting his message with an emoji of a US flag.

During his rally speech, Kanye, who was dressed in a bullet-proof vest with 2020 shaved into his hair, shared that in 2013 Kim 'had the pills in her hand' to have an abortion before he was inspired by God to have the child.

'My girlfriend called me screaming, crying. I'm a rapper. And she said I'm pregnant. She was crying,' he said.

Kanye said he was weighing up what to do, when he received what he interpreted as a sign from God while he was working on his laptop in Paris.

'My screen went black and white. And God said, if you f*** with my vision I f*** with yours,' he yelled. 'And I called my girlfriend and said we're going to have this child.

'Even if my wife were to divorce me after this speech, she brought North into this world, when I did not want to.'

The rapper went on to break down in tears as he shouted: 'She had the pills in her hand! I almost killed my daughter!'

Kanye also revealed that his father wanted to abort him but his mother Donda 'saved his life'.