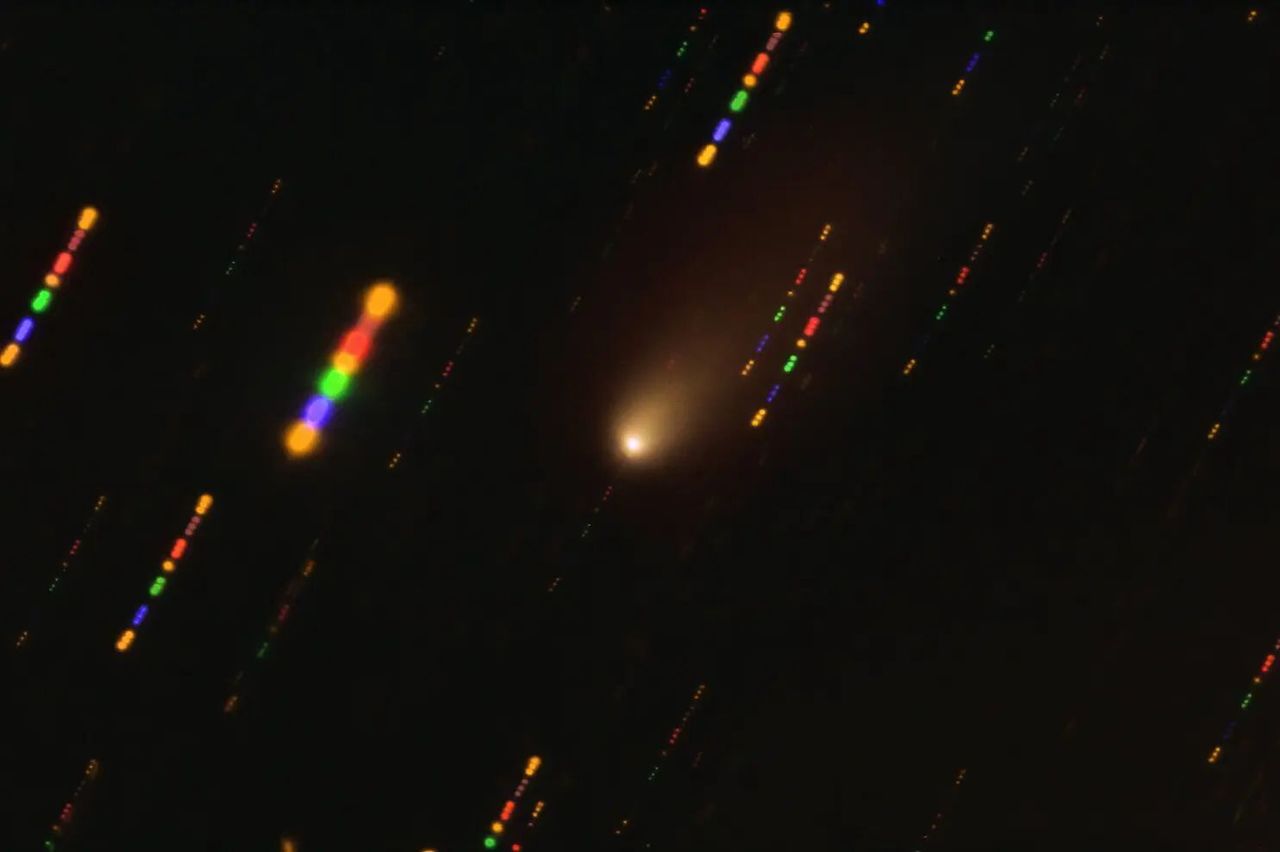 The U.S. Space Command seemed to confirm a claim that a meteor from outside the solar system had entered Earth’s atmosphere, but other scientists and NASA are still not convinced.
In early 2014, a dishwasher-size meteor dashed over the shores of Papua New Guinea before sunrise as it burned up in the fiery friction of Earth’s atmosphere. But two Harvard researchers argued that this wasn’t just any space rock: It originated from another star system, they said, making it the first observed meteor of interstellar origin.

They wrote up the extraordinary claim and submitted it to an astronomy journal. But the paper was not accepted for publication. Reviewers noted a lack of sufficient detail to verify the claim about the fireball in the published data, which came from a NASA database and relied on readings that were obscured because they were from U.S. intelligence community satellites, and could reveal how the military monitors missile launches.

“We had thought this was a lost cause,” said one of the researchers, Amir Siraj, a Harvard undergraduate student studying astrophysics. Without the more thorough data, he conceded, it was difficult “to figure out whether the object was truly interstellar or not.”

But, it turned out, the truth was out there. Last month, the U.S. Space Command released a memo to NASA scientists that stated the data from the missile warning satellites’ sensors “was sufficiently accurate to indicate an interstellar trajectory” for the meteor. The publication of the memo was the culmination of a three-year effort by Mr. Siraj and a well-known Harvard astronomer, Avi Loeb.

Many scientists, including those at NASA, say that the military still has not released enough data to confirm the interstellar origins of the space rock, and a spokeswoman said Space Command would defer to other authorities on the question. But it wasn’t the only information about meteors to be released. The military also handed NASA decades of secret military data on the brightness of hundreds of other fireballs, or bolides.

“It’s an unusual degree of visibility of a set of data coming from that world,” said Matt Daniels, assistant director for space security at the White House’s Office of Science and Technology Policy, who worked on the data release. “We’re in this renewed period of excitement and activity in space programs generally, and in the midst of that, I think thoughtful leaders in multiple places said, ‘you know, now is a good time to do this.’”

In recent years, a pair of objects that passed through our immediate stellar neighborhood drew considerable attention because they were confirmed to have originated outside the solar system. The first object was Oumuamua, a long, flat body that zoomed through the solar system in 2017. Dr. Loeb, one of the two who studied the 2014 meteorite, has also attracted attention and dispute by arguing that Oumuamua was technology sent by intelligent life. Other astronomers are still debating what kind of natural object it was.

In 2019, Borisov, a comet roughly the size of the Eiffel Tower, became the second confirmed interstellar visitor. A piece of it broke off in 2020 after it rounded the sun.

While data from classified military satellites may not have aided the study of those interstellar visitors, they could help academic researchers study objects closer to Earth. They could also aid NASA in its federally assigned role as defender of planet Earth from killer asteroids. And that is the goal of a new agreement with the U.S. Space Force that aims to help NASA’s Planetary Defense Coordination Office better understand what happens when space rocks reach the atmosphere.

Dr. Daniels at the White House played a key role in the Harvard researchers’ effort to clinch a public statement from Space Command. After getting rejected from The Astrophysical Journal Letters, a peer-reviewed scientific publication, Dr. Loeb said he contacted a colleague at Los Alamos National Lab who eventually connected him with Dr. Daniels. The White House official then brought up the meteor in a conversation with Space Command officials in 2020, which kick-started government efforts to make a public statement on the military satellite’s data about the purported interstellar meteor.

“I knew that this would be a challenge, and so it was an ongoing conversation for some time,” Dr. Daniels said.

Sharing sensitive military satellite data with astronomers has led to significant scientific discoveries in the past.

A group of satellites deployed in the 1960s by the United States to detect covert detonations of nuclear weapons on Earth accidentally became the key instruments used to make the first detection of extraterrestrial gamma ray bursts. The bursts showed up on the satellites, code named Vela, as single bursts of energy, confusing analysts at Los Alamos National Lab who later declassified the data in a 1973 paper that spurred academic debate about the bursts’ origins.

But while arguments about the gamma bursts were largely resolved later, Mr. Siraj and Dr. Loeb’s hypothesis about the interstellar meteor is still a subject of dispute.

While many — including the two Harvard astronomers — have interpreted Space Command’s statement to NASA as confirmation that the meteor is interstellar, some astronomers believe more data is needed to back up the claim. The available measurements, they say, lack error bars that indicate how precise or uncertain they were.

“The sentence is not enough. Scientific results are published, they are not secret,” said Maria Hajdukova, a researcher at the Astronomical Institute of the Slovak Academy of Sciences in Slovakia who studies meteors and examined the Space Command corroboration. “I’m not saying I don’t believe it, but if I don’t have facts I cannot claim it,” she added.

NASA said in a public statement this month that “the short duration of collected data, less than five seconds, makes it difficult to definitively determine if the object’s origin was indeed interstellar.”

Dr. Loeb and Mr. Siraj disagreed. “Five seconds is plenty of time,” Dr. Loeb said. “It’s not the duration that matters, it’s the quality of the data that was assembled that matters. During five seconds you can do a lot, in terms of instrumentation and measurement.”

He and Mr. Siraj plan to resubmit their paper to The Astrophysical Journal Letters. And the data about the 2014 meteor now coming from the military agency may help their argument, said Peter Veres, an astronomer at the International Astronomical Union’s Minor Planet Center, which tracks objects in the solar system.

That data shows an unusual sequence of three explosions of light as the object was barreling through Earth’s atmosphere. “It looks weird, I can tell you that,” Dr. Veres said, noting that the brightness of meteors during their plunge typically peaks only once.

The Space Command letter was provocative enough to be noted by NASA officials who shared it throughout the agency’s Science Mission Directorate and with its Small Bodies Assessment Group. Lori Glaze, the director of NASA’s planetary science division, said in an email to colleagues that “we believe the potential of this event being an especially high-velocity entry of a very small body into Earth’s atmosphere will be of interest to the small bodies community.”

A core reason for Space Force’s increasing ties with NASA has centered on the agency’s congressional mandate to detect nearly all asteroids that could threaten the earth. When NASA signed an agreement in 2020 to strengthen ties with Space Force, the agency acknowledged it had fallen behind in its asteroid-tracking efforts and would need Pentagon resources to carry out its planetary defense mission.

The recent bolide agreement, granting NASA access to light curve data that will help scientists analyze the physical properties of plunging fireballs, is one step in that direction.

“This is a very rich data set that has now been released by U.S. Space Force and U.S. Space Command for the scientific community,” said Dr. Johnson, NASA’s planetary defense chief. “I know the meteor researchers, those that now have a chance to look at this data and compare it to other data sources and such, are very excited about it.”
#Johnson
Add Comment