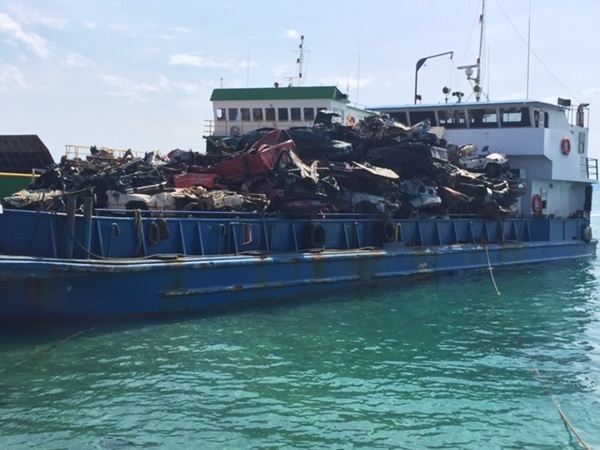 Social Development Minister Carvin Malone has announced that almost 2,000 tonnes of scrap metal has left the BVI so far this year.

Tortola Concrete Products has been contracted to process and export derelict vehicles and other scrap metal out of the BVI.

The scrap metal was transported on a barge to Colombia where it will be processed. Minister Malone said the scrap metal accounts for some 1,800 derelict vehicles.

And within the next two to three months, Minister Malone said the government is expecting to export even more derelicts from the BVI

“In the upcoming weeks, the Department of Waste Management will be engaged in the aggressive campaign to tag, collect and remove all remaining derelict vehicles throughout the territory. The derelict vehicles from Anegada have been removed and those from Jost Van Dyke will be removed, Virgin Gorda … and the war on derelict vehicles continues in these upcoming months,” Minister Malone explained.

What about Jost Van Dyke?

While Malone announced the war on derelicts, Second District Representative Melvin ‘Mitch’ Turnbull asked when the derelicts from Jost van Dyke would be removed from the island.

In response, Minister Malone said there are about 40 derelict vehicles on that island, adding that they will be removed before the scrap metal removal programme comes to a close. But the Minister said the government may be hindered by some vehicle owners who refuse to part ways with their derelict vehicles.

“There are some operators who love to hold on to their derelict vehicles and although they strip it of engines and whatever they can salvage, these persons still hold it. All throughout the territory, we are plagued with this. Each one of us would be encouraged to tell folks within our remit to let go. Take a picture of the derelict vehicles but let it go,” Minister Malone said.

The issue of derelict vehicles became a serious concern immediately after the 2017 hurricanes when a number of vehicles were destroyed and had to be discarded by owners.