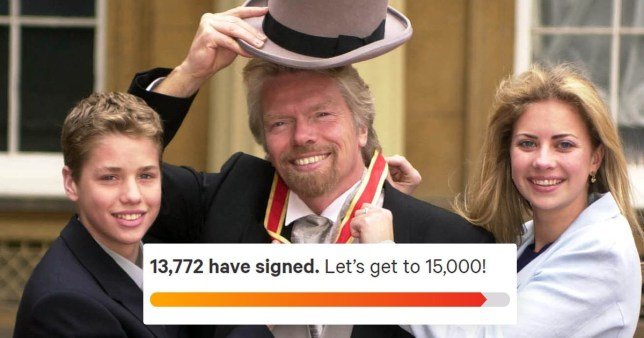 Petition to strip Richard Branson of his knighthood gets 13,000 signatures

'You can't beg for the UK to pour money to bailout a half-American company when you're sitting on an island wherever you are not paying tax.'
A petition signed by more than 13,000 people calls the business magnate a ‘disgrace to his country’ for asking the UK Government for a £500 million bailout for Virgin Atlantic despite reportedly not paying income tax for 14 years.

Sir Richard came under fire last month after Virgin Atlantic staff were asked to take eight weeks unpaid leave as the airline industry was thrown into chaos due to the coronavirus pandemic. However the airline’s founder has offered his £80 million luxury Caribbean private island as collateral to save the company, 49% of which is owned by US airline Delta. The petition’s founder told Metro.co.uk: ‘What he’s doing is wrong. You can’t beg for the UK to pour money to bailout a half-American company when you’re sitting on an island wherever you are not paying tax.’

The page also criticises Virgin Care for suing the NHS for an undisclosed amount in 2017 over a dispute over the procurement process for contracts. The petition’s creator, from Nottingham, said getting so many signatures in the space of a week shows how angry many people are about Sir Richard’s record.

He added: ‘You’re not going to get him stripped of his knighthood but this is how people are feeling, it’s just the level of resentment.’ The 26-year-old activist, who has asked not to be named, shared the petition on his new social media network called Dunya Stays Mad – (Dunya being an Arabic word for world) – on which he plans to promote more campaigns in the future.

In November 2017 the NHS paid an undisclosed settlement to Sir Richard’s Virgin Care after the company sued six Surrey clinical commissioning groups NHS England and Surrey County Council after the three-year £82 million healthcare deal was awarded to a group of in-house NHS providers and a social enterprise. At the time the Labour Party said it was ‘scandalous’ that the NHS was forced to face legal action from Virgin Care and called for the Department of Health to disclose further details on the settlement.
#Coronavirus
Add Comment