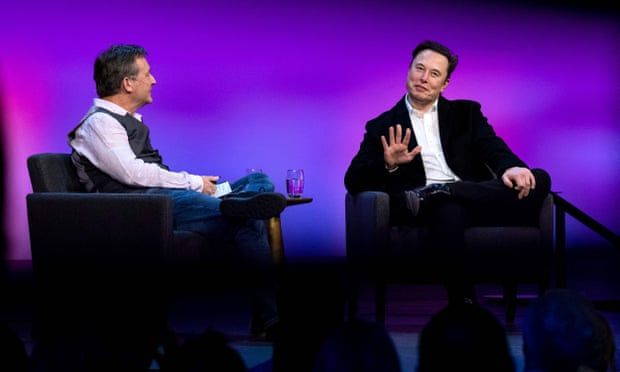 US billionaires now own a combined $4.7tn, according to a new analysis – but to Elon Musk, since he doesn’t have a yacht or own a home, that’s totally OK

“We’re all in this together.” Remember that corny catchphrase from the early days of the pandemic? Remember when there was a smidgen of hope that the collective trauma the world was facing would reshape people’s priorities and the pandemic could be a portal to a better, fairer society?

Well, two years on, precisely none of that has happened. People clapped for essential workers for a bit but didn’t stop exploiting them. Meanwhile it’s boom time for billionaires, who saw their already obscene wealth grow exponentially during the pandemic. A new analysis released by Oxfam America on Monday, to mark tax day in the US, found US billionaires now own a combined $4.7tn in wealth. Much of this goes untaxed; last year ProPublica analyzed leaked tax returns and found the 25 richest people in the US paid a true tax rate of just 3.4% from 2014 to 2018. The average taxpayer, meanwhile, pays a true tax rate of 13%. It wasn’t always like this. As Oxfam notes, it really wasn’t that long ago that the ultra-wealthy paid their fair share in tax; during the second world war, the federal income tax rate peaked at 94% and was still 70% three decades later. The rich haven’t just gotten richer, they’ve also gotten a lot more selfish.

While billionaires have seen their bank accounts balloon and corporations are raking in record profits, ordinary people are hurting from decades-high inflation. By some accounts, the inequality gap in the US is worse now than it was in France in the 1780s just before the French Revolution. It’s easy to get angry about all this, but you might want to wait a moment before jumping to the seemingly obvious conclusion that gross inequality is bad and we really ought to do something about it. You see, in a recent (embarrassingly fawning) interview with Chris Anderson, the head of Ted, Elon Musk helpfully billionaire-splained why it’s actually OK for a handful of people to hoard obscene amounts of wealth.

“There are many people out there who can’t stand this world of billionaires,” Anderson said to Musk in the interview. “Like, they are hugely offended by the notion that an individual can have the same wealth as, say, a billion or more of the world’s poorest people.”

Only an idiot would be offended by something like that, Musk essentially replied. “I think there’s some axiomatic flaws that are leading them to that conclusion,” he told Anderson. “For sure, it would be very problematic if I was consuming, you know, billions of dollars a year in personal consumption. But that is not the case. In fact, I don’t even own a home right now. I’m literally staying at friends’ places … I don’t have a yacht, I really don’t take vacations. It’s not as though my personal consumption is high.”

Musk, who is worth almost $300bn, did concede that the one exception to his incredibly ascetic lifestyle is his $70m private jet, but said its use was justified because it gives him more hours to work. It’s essentially in the public good.

So there you go. Put down your pitchforks everyone! Stop sharpening your guillotines! Anyone getting angry about inequality simply needs to examine their “axiomatic flaws”. It’s perfectly OK that the world’s billionaires have more wealth than 60% of the world’s population combined, as long as they buy private jets instead of yachts and couchsurf at their mate’s mansion instead of paying property tax on their own house. Really glad Musk cleared that up for us all.

“Everyone is asking me [this], and that is a good question,” Talabi told Page Six. “But a great question would be asking our world leaders why the Earth is now losing 1.2tn tons of ice each year due to global warming and why climate crisis reform has been completely ineffective. I encourage you to contact your local representatives and ask them that.” An A+ answer.

The Meta executive, who has built a brand around women’s empowerment, reportedly pressured the Daily Mail to drop unflattering stories about her ex-boyfriend Bobby Kotick, the Activision Blizzard CEO. Kotick, who Sandberg dated for three years until 2019, isn’t exactly the sort of dude you want to be associated with if you’ve made a name for yourself by championing women: he has been heavily criticized recently over allegations he was aware of “many incidents of sexual harassment, sexual assault and gender discrimination at Activision Blizzard”. Meanwhile, the stories Sandberg is alleged to have quashed reportedly revealed that Kotick’s former girlfriend filed a temporary restraining order against him because of bullying behaviour. (All parties involved deny doing anything inappropriate and say the allegations against Kotick are untrue.)

Alfreda Scheuer leaned into her job so much that the CIA operative was dubbed “the Queen of Torture” by the New Yorker in 2014. Rolling Stone reports that Scheuer has now moved on to shilling skin serums on Instagram and is a life coach at company she runs called YBeU Beauty, where she helps women “look good, feel good, and do good”.

A survey of 10,000 British women found makeup purchases and frequency of wearing cosmetics dropped by almost a third since 2020.

The oil giant has updated company guidance on what flags can be displayed outside its offices, banning “external position flags” such as Pride and Black Lives Matter, according to Bloomberg. This is all in the name of maintaining “neutrality” apparently. Because neutrality is obviously just being white and straight.

Some rare good news in the continued war against reproductive rights in the US.

The world of NFTs is getting the #girlboss treatment

This piece is worth reading simply for the phrase “non-fungible tokenism”.

This week I learned that there is a cafe in Tokyo called the Manuscript Writing Cafe which won’t let you in unless you’re a writer on a deadline and won’t let you leave unless you meet that deadline. The cafe also charges by the hour. A truly genius business idea.