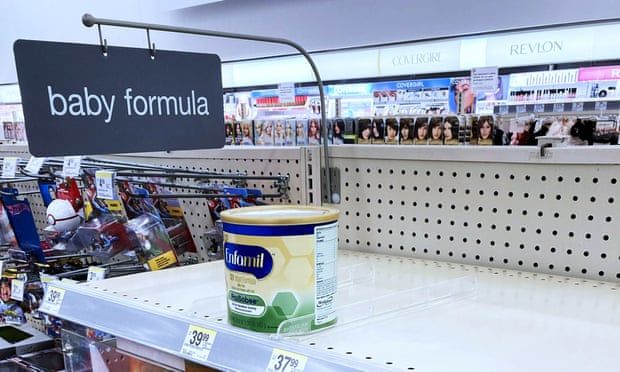 The US is running out of baby formula: yet more evidence that new mothers can never win

Women have breastfed for thousands of years and yet there are still those who think we can just ‘switch on’ our milk
I had an easy pregnancy, a textbook C-section and the gift of a two-week recovery period alone at home after my twins were sent to the newborn intensive care unit – or, having given birth in the US, “the world’s most expensive babysitting service”, as a nurse described it at the time.

One consequence of this was that I was fully healed by the time they came home. Another was that in the first two weeks of my babies’ lives, breastfeeding had to be supplemented with formula. By the time they left hospital, my supply was getting sketchy, which as it turned out was the least of our problems. Trying to get two preemies, not much bigger than guinea pigs, to latch was like asking them to eat peas off a beachball.

I’d forgotten about all this. As with everything to do with childrearing, there’s a scorched-earth psychology that means each stage renders its antecedents uninteresting. When something comes along to trigger the memory of those first weeks and months – a friend having a baby or, as in the US at the moment, a shortage of baby formula that this week saw two babies in Memphis hospitalised – I’m struck simultaneously by just how absurd the experience was and how out of whack the conversation around it continues to be.

The formula shortage in the US is a result of supply-chain problems, exacerbated by one of the biggest suppliers, Abbott Nutrition, recalling its formula after four babies who had consumed its product were hospitalised with bacterial infections. As a result, tins of formula have been listing on eBay for $120 a pop and babies with specific nutritional needs, such as the two in Memphis, are in danger of various dire health failures.

These are the worst-case scenarios. The more bearable but still aggravating casualty is the equilibrium of breastfeeding mothers. It is so very weird that an activity undertaken by millions of women over thousands of years is still subject to such wilful misunderstanding. With an air of “let them eat cake”, up popped the commentators on social media asking mothers why they didn’t just switch on their boobs. It was mostly, although not exclusively, men. Women police each other, too, and along came Bette Midler, of all people, jumping on Twitter to say: “Try breastfeeding! It’s free and available on demand.”

When people shouted at her for being insensitive, she clarified: “No shame if you can’t breastfeed, but if you can & are somehow convinced that your own milk isn’t as good as a ‘scientifically researched product’, that’s something else again.” I don’t know anyone still labouring under the delusion that breast milk isn’t “good enough” for their babies. In fact, the opposite tends to be true, particularly in communities that over-invest in the word “natural”. But anyway, as all new mothers know, you can’t win. Whatever you do, someone, somewhere will surface to ask why you aren’t doing it the other way.

And, obviously, “available on demand” is not the case for lots of women. Back it all came, in a nightmarish rush; the series of breastfeeding consultants; all the mad things I ate (brewer’s yeast; endless oatmeal) to increase my supply; having too little milk, then too much. The formula itself, gross-smelling and thin – standing in the kitchen, warming the bottles in a cup of hot water, wondering how they could stand to eat the stuff. The middle-of-the-night delirium in which I wondered whether Vietnam was worse than this, surely not. The body that wasn’t mine any more. The endless bloody how-to-breastfeed-your-twins classes. The sense of failure, and failure, and failure again.

And my god, the anxiety: the knowledge that with babies that small there is no margin for error. The old adage about children and food – “they won’t let themselves starve” – doesn’t work with six-week-old babies who weigh less than a pack of butter. They don’t eat quickly at that age. Eyes on the clock, watching the two-hour rotational feed take an hour and a half, knowing that, this cycle, you’ll only have 30 minutes off, so it’s cheat-with-formula or go actively mad.

I’d forgotten all this, as most women do. But in weeks such as these, the fact that this experience falls squarely within the normal range only makes the conversation around breastfeeding – as around everything to do with babies, from “too posh to push” to “cry it out” – inclined to trigger a rage that has been dormant for years.
Add Comment