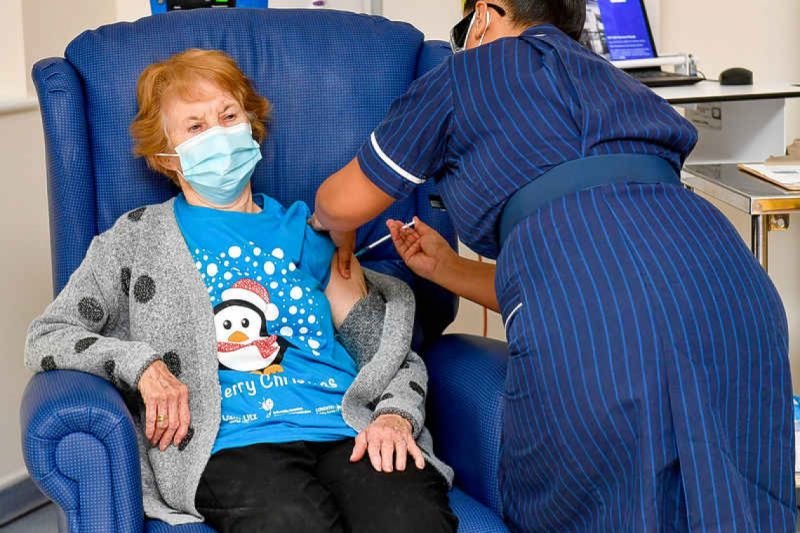 A 90-year-old grandmother became the world's first person to receive a fully-tested COVID-19 shot on Tuesday, as Britain began mass-vaccinating its people in a global drive that poses one of the biggest logistical challenges in peacetime history.
Health workers started inoculating the most vulnerable with the vaccine developed by Pfizer and BioNTech, with the country a test case for the world as it contends with distributing a compound that must be stored at -70C (-94F).

Margaret Keenan, who turns 91 in a week, was the first to receive the shot, at a hospital in Coventry, central England. "It's the best early birthday present I could wish for because it means I can finally look forward to spending time with my family and friends in the new year after being on my own for most of (this) year," she said.

Pfizer received another boost when the US regulator's staff raised no new safety or efficacy issues. The launch of the vaccine, one of three shots that have reported successful results from large trials, will stir hope that the world may be turning a corner in the fight against a pandemic that has killed more than 1.5 million people.

Britain, the worst-hit in Europe with over 61,000 deaths, is the first Western nation to begin mass vaccinations and the first globally to administer the Pfizer/BioNTech shot. But despite the relief of people receiving the first of the two-dose regimen, they will have to wait three weeks for their second shot, and there is no evidence immunisation will reduce transmission of the virus.

"It will gradually make a huge, huge difference. But I stress gradually, because we're not there yet. We haven't defeated this virus yet," Prime Minister Boris Johnson said.

Health Secretary Matt Hancock said he expected millions to be vaccinated by the end of the year, and described the start of the drive as "V-Day". But he cautioned people should respect social-distancing rules until spring at least, when he hoped the most vulnerable people would be vaccinated.

Britain has ordered enough supplies of the Pfizer/BioNTech shot to vaccinate 20 million people in the country of 67 million. The developers said it was 95% effective in preventing illness in final-stage trials.

Russia and China have both already started giving domestically produced vaccine candidates to their populations, though before final safety and efficacy trials have been completed.

In Britain, about 800,000 doses are expected to be available within the first week, with care-home residents and carers, the over-80s and some health workers prioritised. Hancock said he had a "high degree of confidence" Britain would take delivery of another batch of the vaccine next week.

"I know we're absolutely bursting at the doors with COVID patients, so I more than anybody want it to happen quickly," said Ami Jones, a hospital intensive-care consultant from Wales who received the jab before going to work.

Britain is relatively small with good infrastructure. Yet the logistical challenges in distributing the vaccine, which only lasts five days in a regular fridge, mean it will first go to dozens of hospitals and cannot yet be taken into care homes.

Bigger tests could await the Pfizer/BioNTech shot, as well as one from Moderna, which was found to have a similar level of success in trials and is based on the same mRNA genetic technology that requires such ultra-cold storage. Transport and distribution could prove more difficult in hot countries and bigger nations such as the United States and India, which have been worst-hit by COVID-19 and are expected to approve the shot for emergency use in the coming days or weeks.

South Korea, which has coped relatively well with the pandemic, sounded a note of caution, saying it would not hurry vaccine rollouts, partly to give it time to observe potential side-effects in other countries. Vaccinations may start in the first half of 2021, the health ministry added.

The third vaccine with trial success, developed by AstraZeneca and Oxford University, is viewed as offering one of the best hopes for many developing countries because it is cheaper and can be transported at normal fridge temperatures. But AstraZeneca and Oxford have more work to do to confirm whether their vaccine can be 90% effective, a peer-reviewed paper in The Lancet showed on Tuesday, potentially slowing its rollout. Late-stage trials found it had average efficacy of 70.4% in peer-reviewed data.
#COVID-19  #vaccine  #Pfizer  #BioNTech  #AstraZeneca  #Covid  #Boris Johnson
Add Comment