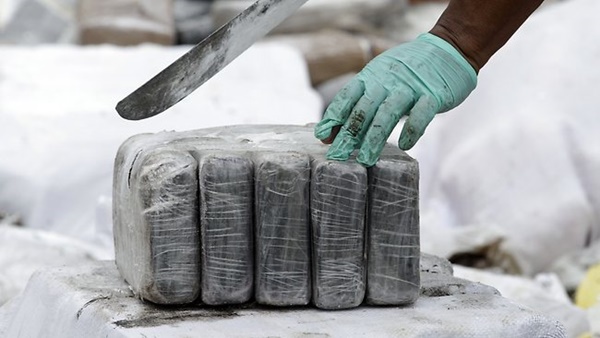 United States Virgin Islands (USVI) authorities are alleging that a man they recently charged with smuggling 433 pounds of cocaine into their territory is also responsible for the more than 2,300 kilos of cocaine recently seized in the BVI.

The November 6 seizure of 2,300-plus kilos of cocaine is the largest ever made in the BVI and in a British Overseas Territory.

The men were charged with possession with intent to distribute 433 pounds of cocaine. Under US law, the maximum penalty for such an offence is life imprisonment.

USVI authorities believe all five men are members of a major drug trafficking organization that operates in the British Virgin Islands, St Thomas, Puerto Rico and the Dominican Republic.

The Virgin Islands Daily News reported that Assistant US Attorney Delia Smith — a federal prosecutor in the USVI said: “The leader of the organization, defendant Reyes-Barel, fled Tortola, British Virgin Islands, on or after November 6, 2020, after Royal Virgin Islands Police Force attempted to execute an arrest and search warrant on Reyes-Barel”.

She added that after Reyes-Barel fled, the Royal Virgin Islands Police seized about two tons of cocaine, several automatic rifles and cellphone and personal identification owned by Reyes-Barel.

The USVI prosecutor also alleges that BVI police officer Darren Davis, and his brother Liston Davis who were arrested in connection with the recent cocaine bust acted as Reyes-Barel’s protection and secured his cocaine on their property.

An affidavit from the USVI reveals that about 9:30 pm on November 18, Reyes-Barel and his four co-accused were arrested by US security forces that intercepted a vessel that was traveling from St Thomas to Puerto Rico.

As the authorities tried to force the vessel to stop, they “saw individuals onboard throwing black objects overboard into the ocean”.

The authorities pursued the fleeing vessel until it “finally stopped”.

Reyes-Barel reportedly told USVI police he was trying to get to Puerto Rico and that he paid $500 to a boat captain in Tortola to transport him to St John.

He also said he didn’t know the duffel bags were aboard when he boarded the vessel bound for Puerto Rico.

In the meantime, USVI prosecutors said the five men must be held without bond pending trial because of the severity of their alleged crime, and the likelihood that they will flee prosecution and a possible life prison sentence.

It’s unclear but unlikely Reyes-Barel will be brought back to the BVI to answer to alleged charges against him.