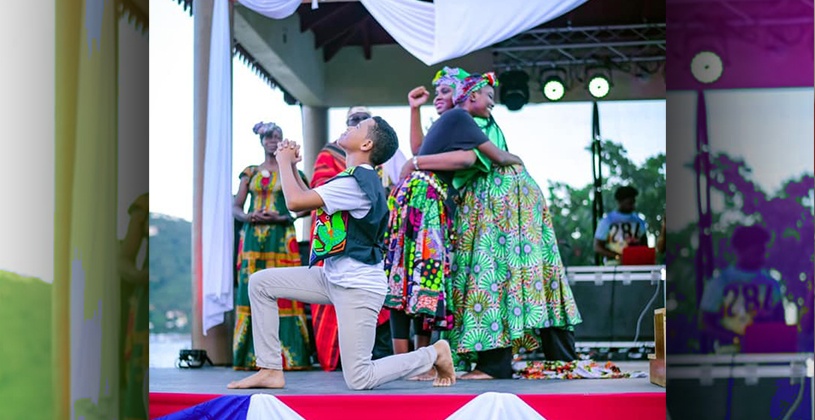 BVI Culture Lauded at Successful Festival Of The Arts

Virgin Islanders are talented and anyone who really wanted to see that talent on display needed to be at the first annual Delores Christopher Festival of the Arts that was held at the Queen Elizabeth II Park on November 2.

The Festival which was spearheaded by Minister for Education, Culture, Youth Affairs, Fisheries and Agriculture, Dr. the Hon. Natalio Wheatley was held under the theme, “The Evolution of BVI Culture;” and artistically showcased the developing aspects of Virgin Islands’ culture.

This all day cultural extravaganza was organized in collaboration with the Association for the Promotion of Arts and Culture (APAC) and featured participation from the BVI 2019 CARIFESTA delegation which included poets, graphic designers, painters, dancers, fashion designers, film makers, photographers and storytellers.

One of the highlights was the peas soup and fungi & fish cook-off competition. This aspect of the program featured student representatives from the various schools serving up the two iconic BVI dishes in the format of a friendly competition.

Another interesting feature was the Main Street tour which took the form of a walk that was spearheaded by Miss BVI Bria Smith and made stops at places like the old prison which is now a museum. Other big highlights of the packed programme was the historical depiction of the 1949 march, a steel pan competition, a Territorial wear inspired fashion showcase; as well as an art exhibition.

There was a reflective part of the programme as the children of the Hon. Delores Christoper took the stage to speak of her fondness for the Territory’s culture, and their joy of having their mother’s passion for cultural remembered.

Hon. Christopher’s daughter Najan said the family is deeply moved and honoured to attend the event named in honour of their mom.

"I want to congratulate all the recipients. The arts is something that enriches our lives. Without music, without dance, life would be a lot dull; and my mom was a creative person. She believed in these islands and in the talent, the skills, the technology and the history of the things that helped us to survive as a people here on island where we didn’t always have the opportunity to import whatever we might think we might need,” Najan stated.

Hon. Christopher’s son, Troy said, “One of the points that my mom really believed in was that we did not know how ingenious we were sometimes. We did not study our history enough and we did not honour the people and the legacy that was passed on to us.”
Add Comment