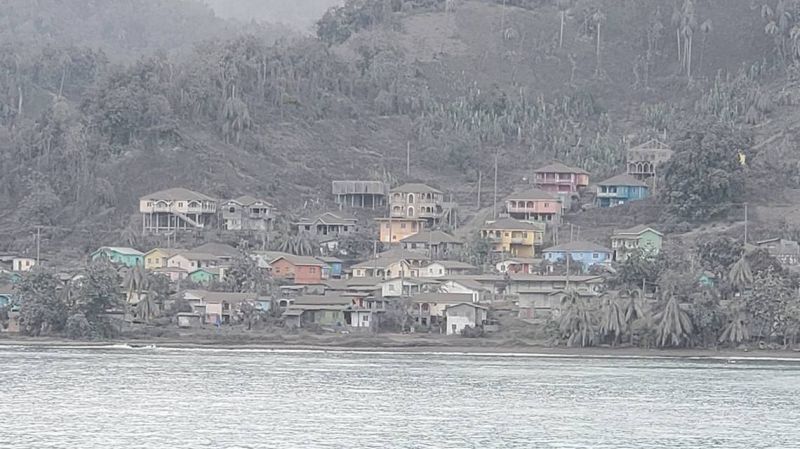 In response to the devastation caused by the eruption of the La Soufriere volcano which started on April 9th, 2012, the BVI Non-Profit Organisations (NPOs), Government, businesses and the wider community are collaborating to bring urgently needed relief to the people of St. Vincent and the Grenadines.
The St. Vincent and the Grenadines (SVG) Relief Drive includes the collection of enough food and supplies to fill a barge and is being led by the Lions Clubs of the BVI.

The Government of the Virgin Islands has organised a barge which is scheduled to set sail on Thursday, April 22nd from Tortola and April 23rd from Virgin Gorda and is expected to arrive in St. Vincent on Monday, April 26th.

The overall initiative is a collaborative effort between organising partners Rotary Family of the BVI, the Lions Clubs of the BVI, St. Vincent and the Grenadine Association (SVGA), the BVI Red Cross, the Adventist Development and Relief Agency (ADRA), the Department of Disaster Management (DDM) and the Government of the Virgin Islands.

Premier of the BVI, Hon. Andrew Fahie commented that “this initiative is a perfect example of BVI Love where the community comes together to help those in need, whether at home in the Virgin Islands or abroad”. For its part, the Government, through Minister for Health and Social Development, Hon Carvin Malone (AL), was able to secure the services of EZ Shipping who provided a barge to transport the donations to St. Vincent at no cost except for fuel which is envisaged to be covered through donations.

The Collection effort is being coordinated by the Lions Clubs of the BVI in collaboration with the other organising partners, and is designed to ensure that everyone has an opportunity to participate. “We are coordinating our efforts directly with Lions Clubs of St. Vincent who are collaborating with Rotary Clubs there to target the needs of the 8,000 households sharing their space with friends and families,” said President of the Lions Club of Tortola Kedrick Malone. A special request was made by the Lions Clubs in St. Vincent for toys and games for the children who were already enduring difficult conditions during the pandemic.

The collected items will be consolidated at a warehouse made available by JOMA Properties in Port Purcell where an army of volunteers from Lions, Rotary, SVGA, Red Cross, ADRA and the community will be sorting and packaging donations to prepare them for shipment under the guidance of a DDM logistic expert, Cecil Jeffrey.

DDM Director, Jasen Penn, said: “We have learned much from the pandemic and past disasters about managing the collection of donations and are prepared to run a very efficient operation.” He explained and stressed that the National Emergency Management Operations (NEMO) of St. Vincent has issued specific guidelines which include not accepting personal effects addressed to individual citizens. All items received will be inventoried and bulk packaged for delivery to facilities operated by NEMO and then distributed to various shelters and organisations based on NEMO protocols.

On Thursday, April 15th, the Rotary Family of the BVI will be coordinating a Telethon and a “Bucket Brigade” in collaboration with the other organising partners, with the goal of raising $50,000. The funds will be sent through the Rotary Club of St. Vincent who are working with NEMO. These funds will be used to purchase food and other urgently needed supplies on the island and at the same time provide a bit of a stimulus for the ravaged economy. Ryan Geluk, Assistant Governor of the Rotary Clubs of the BVI said “Rotary’s control and transparent channels to get relief to where they need to go will provide a quick and efficient way of targeting assistance and allows those affected to get the specific items they need”.

According to Stacy Lloyd, Director of BVI Red Cross, the International Federation of Red Cross has already allocated $288,000 to St. Vincent and the Grenadines from their Disaster Relief Emergency Fund to cover 700 families in the area of shelter, health and livelihoods. The BVI Red Cross is already collecting items for donation and will also be accepting local cash donations. Director Lloyd said, “the Red Cross is a global brand and we are always prepared to respond locally and anywhere where help is needed.”

The SVGA is also collaborating in the community to collect donations for its homeland. They will be partnering with owner of Pancake Paradise, Eustace “Boss” Freeman and the Entertainment Fraternity, to perform at a Donation Drive on Saturday, April 17th from 3:00 pm to midnight at Pancake Paradise on Wickhams Cay by the RT O’Neal Administration Complex. Members of the SVGA will be on hand to collect donations. They are also partnering with Pastor of the New Testament Church of God and St. Vincent Consul in the Virgin Islands, Bishop Ishmael Charles, to collect donations at the church in Baughers Bay.

All of these efforts are expected to bring some much-needed relief to the people of St. Vincent and the Grenadine during a very difficult time. The organisations ask persons to be as generous as they are able to as the situation was reversed in 2017 when the BVI was devastated by Hurricane Irma and the Government and people of St. Vincent and the Grenadines provided strong support for the BVI. It is now our time to return the favour.
#Fahie  #the Virgin Islands
Add Comment