With GameStop's stock price still near $200, the company is considering selling new units to help fund the ongoing "transformation" led by Ryan Cohen.

Ailing video game retailer GameStop has yet to cash in on the ongoing stock bubble impact its stock.

As of Tuesday afternoon, GameStop was trading at just over $180 per share — a tenfold increase over where it was before the bubble. But that could be about to change, according to a new SEC filing from GameStop.

"Since January 2021," the filing says, in reference to when the stock bubble emerged, GameStop leadership has been "evaluating" whether it should "potentially sell shares."

One major issue with GameStop selling its own stock during a bubble is, of course, perception: GameStop leadership knows the current stock value is massively inflated, and selling stock right now could look pretty bad.

The filing acknowledges as much with a list of factors that are impacting its decision, including "capital needs and alternative sources and costs of capital available to us, market perceptions about us, and the then current trading price."

Any money the company made from those sales could be used "to fund the acceleration of our future transformation initiatives," the filing says. GameStop is currently amidst a "transformation" led by activist investor, board member, and former Chewy CEO Ryan Cohen.

As the leader of a new committee at the company, Cohen is attempting to do for GameStop what he did with Chewy: take on and defeat Amazon in a specific category of ecommerce.

At Chewy, it was pets. At GameStop, of course, it's gaming. 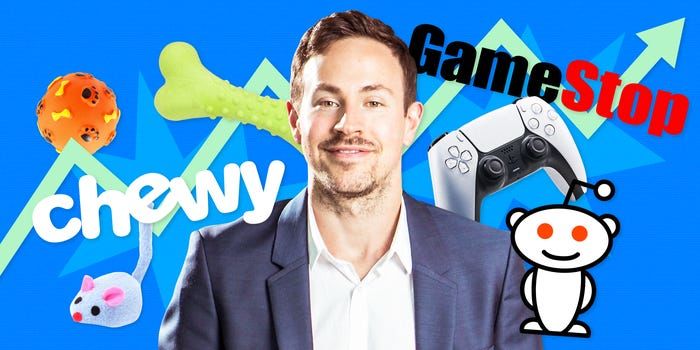 Just over two years ago, in early 2019, GameStop's stock value fell off a cliff: It dropped from about $16 per share to under $4.

And it stayed in that range for just shy of two years.

Even in 2020, while the video-game business (including GameStop) had huge gains during coronavirus lockdowns, GameStop's stock price remained in the gutter. As recently as last August, the largest video-game retail chain in the world had a stock value of less than $5 per share.

But in the second half of 2020, with big financial names like Cohen and Michael Burry buying up shares in the ailing retailer, things started looking up. The company's share value gradually increased until it outright surpassed its pre-collapse value in late 2020.

Two months later, it's late March and GameStop's stock value still hasn't returned to pre-bubble levels: As of this afternoon, it was trading at just over $180.